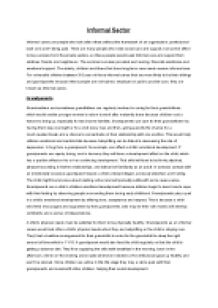 Informal Carers And Their Influence On Children

Transfer-Encoding: chunked ﻿Informal Sector Informal carers are people who look after others without the framework of an organisation, professional work and aren?t being paid. There are many people who need social care and support, but cannot afford to buy services from the private sectors, so these people would seek informal care and support from relatives, friends and neighbours. The common services provided are housing, financial assistance and emotional support. The elderly, children and those that have long-term care needs receive informal care. For vulnerable children between 3-5 year old have informal carers that are more likely to be their siblings and grandparents because these people are not trained, employed or paid to provide care, they are known as informal carers. Grandparents Grandmothers and sometimes grandfathers are regularly involved in caring for their grandchildren, which would enable younger women to return to work after maternity leave because children cost a fortune to bring up, especially for low income families. Grandparents can care for their grandchildren by having them stay overnight or for a visit every now and then, giving parents the chance for a much-needed break and a chance to concentrate on their relationship with one another. This would help children emotional and mental state because babysitting can be linked to decreasing the rate of depression. A hug from a grandparent, for example, can effect a child?s emotional development. ...read more.

This is because a grandparent may praise a good behaviour by referring to the child as ?good girl? or ?good boy.? This tends to have a big influence on the child?s social development because they?ll have to learn to co-operate and communicate with others. Grandparents may take the child to the park to interact with other children, helping the child?s social development. Siblings Another informal career for children that are 3-5 would be their siblings, especially the older siblings. Primary socialisation happens at home so older siblings are seen more like a role model than grandparents and parents because they are closer to the child?s age so an emotional bond would be there. Siblings interact with each other and grow with each other. The younger sibling would see the older sibling as a role model. They would often play with each other. This helping the child?s social and emotional development because they would have someone to play with and won?t feel left alone. The older sibling would become their role model because they would have understood that their sister or brother has gone through the same thing as they are going through. When I was three I considered my older sister my role model because she would often play games with me and evoke emotions like joy. When I was starting my first day of nursery in a primary school I wasn?t worried because I knew my sister would be attending the same school so I could run to her if I was scared. ...read more.

This would help the child?s social development because the child would be meeting someone and interacting with others. This would enable the child to relate to others effectively and to contribute in positive ways to family, school and the community. This could be taught by the siblings when they bring their friends over to introduce to the child or when they take the child to the park, shopping centre or fun fairs. Another way siblings can meet the child?s intellectual needs is by reading a story to them in bedtime. This would increase a child?s vocabulary because they would be listening or repeating new words for them to use when explaining something. When someone is reading the child a book, the child can make their own understanding of the plot. For a sibling reading their younger sibling a story can help with the social and emotional development because the child would be dependent to the siblings and have emotions like love or picture them as their role model. In conclusion, informal carers such as grandparents and siblings can care for a child?s physical, emotional, social and intellectual just like a formal carer would be doing. They can play an important role in a child?s life where the child can be dependent on them or they can be the child?s role model. I have listed out what a sibling and grandparents can do for a child aged 3-5 to show the importance of informal carers can have on that life stage. ...read more.