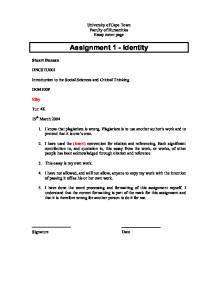 Introduction to the Social Sciences and Critical Thinking

University of Cape Town Faculty of Humanities Essay cover page Assignment 1 - Identity Stuart Duncan DNCSTU001 Introduction to the Social Sciences and Critical Thinking DOH100F Elby Tut: 4K 19th March 2004 1. I know that plagiarism is wrong. Plagiarism is to use another author's work and to pretend that it is one's own. 2. I have used the (insert) convention for citation and referencing. Each significant contribution to, and quotation in, this essay from the work, or works, of other people has been acknowledged through citation and reference 3. This essay is my own work. 4. I have not allowed, and will not allow, anyone to copy my work with the intention of passing it off as his or her own work. 5. I have done the word processing and formatting of this assignment myself. I understand that the correct formatting is part of the mark for this assignment and that it is therefore wrong for another person to do it for me. Signature Date Paragraph 1: Introduction * Through careful analysis of what one's identity is, the forms it takes and the powers that influence its formation, I hope to answer the following question: Do we have absolute control over the development of our identities or is it governed by the perceptions of those around us? ...read more.

Assignment 1 - Identity Through careful analysis of what one's identity is, the forms it takes and the powers that influence its formation, I hope to answer the following question: Do we have absolute control over the development of our identities or is it governed by the perceptions of those around us? I will do this by proposing and opposing various views, introducing ideas and examples from my own knowledge and experience, analyzing them and giving my conclusion at the end. Identities, as much as the perceptions of beauty, are in the eyes of the beholders, they are shaped and moulded by them but do we have the often-said "very little control over" their construction or is it completely in our own hands. The construction of identities is generally more often than not attributed to the way in which people perceive you and your personality, the way you act around people, the manner in which you talk and the way in which you interact with them. These are hence used as a measure on which people formulate opinions of you. It is these opinions that eventually are associated with you and so become your identity. The activities in which one participates have their own identities assigned to them. ...read more.

It influences a lot of things that I do. People, who know me, realize that it just something that I enjoy doing and I do not buy into the identity associated with ballet (be it though it is still incorporated in to my identity). By not humbly standing by, hiding the fact that I dance and feeling self-conscious that people look on me differently, I feel that I have overcome some of the constrictions placed on me by society. Ironically these constrictions are actually quite dependant on my reactions to them. We are too often the ones who confirm the opinions that others have about us. In conclusion, identities are socially constructed, they are represented by certain symbols and other people play a large part in the development of our identities. The question still remains: Do we have absolute control over the development of our identities or is it governed by the perceptions of those around us? One can look at in another way: If you are on an island and there are no other people with you, do you have an identity? My answer is no. The form that your identity takes or the way it is shaped is ultimately dependant on the perceptions of those around you. You need other people or the opinions of others to confirm or deny your identity. ...read more.