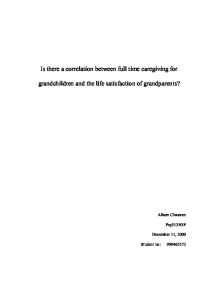 Is there a correlation between full time caregiving for grandchildren and the life satisfaction of grandparents?

From drawing on all these aspects, we can tell that how the adjustments affects grandparents' normal lifestyles negatively. The difficulty of caregiving was made worse by low income, low energy and vitality. Each of these three factors is wrapped around one another in a transactional way. Despite the negative aspects of grandparenting, grandparents did also reported that many of them felt fortunate to be parenting again so they could do a better job than they raised their own children. (Hayslip, B.J., Shore R. J., Henderson, C. E. & Lambert, P. L., 1998). Since grandparenting began, the proximity between the grandparents and grandchildren has been increased. Grandparents were more likely to do more activities with their adolescent grandchildren, are more likely to play a mentorship role. (King, V. & Elder G. H. J., 1998). Grandparents would teach their grandchildren unique skill, which passed from generations to generations. On the other hand, the grandchildren were more likely to tell the problems they had and discuss their future with their grandparents. Hypotheses: The purpose of this study is to explore the difference effects have on between grandmothers and grandfathers who provide full time caregiving for their adult children. Are these effects positive? If so, what are they? If not, what are the negative effects? How are those effects affect their routine daily life? Would grandparenting increased the proximity between both the grandparent-adult children and grandparent-grandchildren relations? If the grandparents can go back and make the decision again would they not provide the care for their grandchildren? ...read more.