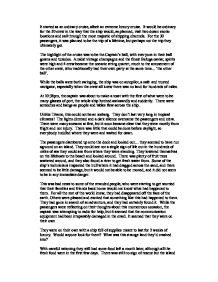 It started as an ordinary cruise, albeit an extreme luxury cruise.

It started as an ordinary cruise, albeit an extreme luxury cruise. It would be ordinary for the 50 crew in the way that the ship would, as planned, visit two dozen exotic locations and sail through the most majestic of shipping channels. For the 30 passengers, it was planned to be the trip of a lifetime, but perhaps not the trip they ultimately got. The highlight of the cruise was to be the Captain's ball, with everyone in their ball gowns and tuxedos. Amidst vintage champagne and the finest Beluga caviar, spirits were high and 4 crew became the oceanic string quartet, much to the amusement of the other crew, who traditionally had their own party at the same time... 'the other ball'. While the balls were both swinging, the ship was on autopilot, a safe and trusted navigator, especially when the crew all knew there was no land for hundreds of miles. At 10:38pm, the captain was about to make a toast with the first of what were to be many glasses of port, the whole ship lurched awkwardly and suddenly. There were screeches and bangs as people and tables flew across the ship. ...read more.

Would anyone look for them? What was this strange land they'd crashed into? With careful rationing they still had some food left a month later, although all the fresh food went in the first few days. There was still no sign of rescue but the island was plentiful with fruit and the water around was teeming with fish. Nobody was going to starve. Still three months later there was no sign of rescue, but there was another surprise. A young honeymooning couple announced that they were going to have a baby. This gave an extra urgency to getting rescued and, although it was a cause for celebration, there were also worries about complications so far away from medical resources. Six months later, crew and passenger divisions had vanished and the new island community was thriving. It's first big event was the birth of a baby girl. There had been no complications in the pregnancy and mother, daughter and father were delighted . So was everyone else and an ornate necklace of pearls and seashells that had been gathered over the months was presented to their newest citizen. ...read more.

This was the only real crisis over a period of 12 full moons. The ship, although still intact, was now little more than a reminder of the past. Everybody's life was now completely natural. No electricity, no gas, no communications ... but strangest of all, no stress and more smiles than anyone could remember from the days before the cruise. To celebrate the 12th moon and the first year, the ship was the setting for a huge party. Unbelievably the ship's petty officer had kept a case of champagne hidden for all this time. He had planned to sell it when the cruise had ended, as he did after taking a case during every cruise. The year on the island had taught him about real values and he said it was the 'honourable thing' to give it back to the people that had become his family. From that day on, the 'civilised world' they had left became increasingly unattractive and the giant HELP signs that had been carved in the rocks were covered over. Maybe this was a chance to have a 'real life', at least until interrupted by unwanted rescuers. ...read more.