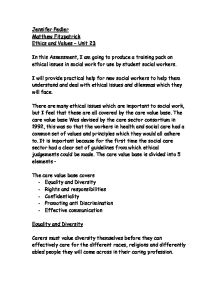 Jennifer Pedler Matthew Fitzpatrick Ethics and Values - Unit 23 In this Assessment, I am going to produce a training pack on ethical issues in social work for use by student social workers. I will provide practical help for new social workers to help them understand and deal with ethical issues and dilemmas which they will face. There are many ethical issues which are important to social work, but I feel that these are all covered by the care value base. The care value base Was devised by the care sector consortium in 1992, this was so that the workers in health and social care had a common set of values and principles which they would all adhere to. It is important because for the first time the social care sector had a clear set of guidelines from which ethical judgements could be made. The care value base is divided into 5 elements - The care value base covers - Equality and Diversity - Rights and responsibilities - Confidentiality - Promoting anti Discrimination - Effective communication Equality and Diversity Carers must value diversity themselves before they can effectively care for the different races, religions and differently abled people they will come across in their caring profession. Diversity is where there are many different kinds of people living in a community together. This means that in a set environment there will be black, Asian, gay, straight, differently abled people living together in a community. Discriminatory prejustice must be able to be recognised by the carer, for example, if a woman is being discriminated against in a care home, or treated differently in a hospital setting, the carer must be able to recognise that this behaviour is happening, and inform a higher power, or go through the complaints procedure, this would be because of legal rights of the client,(which are the right to equal service and the right to treatment which is equal to others) ...read more.

He would say that this respect should be shown by never using people to achieve a persons own goals or ideas. Deontological theory needs a degree of "weighing up" this means that we must weigh up what we think is right and wrong. Deontology also says that an action is right if it respects human rights. This is sometimes referred to as "libertarianism" this is a theory that people should be free to do what they like as long as the individuals actions do not affect another. For example a deontologist's point of view may say that lying is wrong, even if the outcome is good. The opposite of Deontology is consequentialism. This is where the action is not held as morally right or wrong, it the consequence, For example, it is morally right to lie, if the outcome is favourable. An example for social care work could be telling a clients family that he has cancer against the clients will. This could mean in the end that the client's family helps the client in his last months and it helps the client feel better, because he didn't have to break the news to his family himself, but this would be wrong in a deontologists point of view because the carer was going against the clients will and this means that even though the outcome is favourable the action is wrong, and so the entire thing would be deemed unethical. There are some problems with deontological systems though. One of these is that there is no absolute way to resolve conflicts between two or more moral duties. For example, it is against the moral system not to lie, but also to protect a client from harm. But for example, if a social worker had to choose to lie to protect a client from harm, this would mean that he or she breaks one of the moral codes. ...read more.

it is in their best interests, is autonomy more important or the rights of the community to live without a person who may be a danger to themselves and the community? There is also The Children's Act of 1989. This act means that children have the right to be protected from "significant harm" at the hands of others. This is defined by the courts if social services decide to get involved. The harm could be the parents neglecting or abusing their children, or the children themselves being out of control or breaking the law by being involved in drugs or prostitution. This Act concentrated more on parental responsibly rather then parental rights. This means that children are empowered and not treated as property which their parents have rights over. This relates to ethical issues, as it is linked to utilitarianism. This means giving the greatest good to the greatest amount of people. This act protects the children, and makes sure that they are cared for properly and not abused. It also makes sure that places of education do not discriminate against children of different colours or religions or on account of their disabilities. The ethical issues surrounding this Act is who's rights are more important, the right of the parent to have their child with them, or the right of the child to live happily and without fear of abuse. This also applies to schools The Data Protection Act of 1998 means that service users have a right to keep private information confidential, but it also means that they have a responsibly in relation to the rights of other service users. The confidentiality must be kept within certain borderlines, and can be broken when other service user's rights come into conflict. Certain information may need to be passed to a senior member of staff when there is someone in danger. This relates to ethical issues as it is difficult to decide when confidential information should be shared, as described in my ethical dilemma above. ...read more.