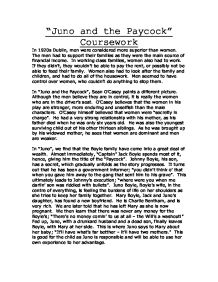 "Juno and the Paycock" Coursework In 1920s Dublin, men were considered more superior than women. The men had to support their families as they were the main source of financial income. In working class families, women also had to work. If they didn't, they wouldn't be able to pay the rent, or possibly not be able to feed their family. Women also had to look after the family and children, and had to do all of the housework. Men seemed to have control over women, who couldn't do anything to stop them. In "Juno and the Paycock", Sean O'Casey paints a different picture. Although the men believe they are in control, it is really the women who are in the driver's seat. O'Casey believes that the women in his play are stronger, more enduring and unselfish than the male characters. O'Casey himself believed that women were "secretly in charge". He had a very strong relationship with his mother, as his father died when he was only six years old. He was also the youngest surviving child out of his other thirteen siblings. As he was brought up by his widowed mother, he sees that women are dominant and men are weaker. In "Juno", we find that the Boyle family have come into a great deal of wealth. ...read more.

Johnny, who was injured fighting for Ireland, and Mary, who is on strike for the principle of it, are both still trying to grow up. Mary, the elder of the two siblings, is stubborn, saying that she will "stick to her principles," and Johnny is trying to hide from his comrades. Johnny has recently become very sensitive and quiet. He is worried about the death of Robbie Tancred, an old childhood friend. Mary however, is still as outgoing as ever. She enjoys a social life, and does not seem at all phased about being on strike, and having an awkward family. Mary and Johnny are both similar in the way that they both stand up for what they believe in. Mary is on strike, and Johnny stands up for his beliefs for Ireland. He lost an arm, and received a permanent limp from fighting during the Easter Rising. Johnny feels disgusted that Mary is pregnant and yet he hasn't told anyone what he has done. "She should be dhriven out o' th' house she's brought disgrace on!" He is being hypocritical. Mrs. Madigan, Mrs. Tancred and Joxer are all friendly with the Boyle family. Joxer is Boyle's "butty" and drinking companion. Mrs. Madigan and Mrs. Tancred are the Boyle's neighbours. Mrs. Madigan and Joxer are both very friendly and wish to help out. ...read more.

Boyle spending the money on a gramophone), and contradictive (eg. Boyle says he doesn't like the church or Father Farrell, then saying that the country would be nothing without them). Women's qualities outweigh their faults. They are "stronger" and "better" than what their faults says about them. Their negative qualities say they are vain and stubborn, but this is nothing in comparison to their positive qualities of being strong, resilient, loving, caring and determined. During this period in history, women were made to feel that they were inferior to men. But, O'Casey's play defies this. Juno stands her ground against the men, and when she has had enough of them, she leaves Boyle. Juno and Mary decide to make their own way in the world, and forget about Boyle. "It'll have what's far betther - it'll have two mothers." I feel that the baby will be better off with two mothers, especially if they are Juno and Mary. They are both wise enough not to fall into traps set by men, and know how not to raise the child. Juno was a good mother to Johnny and Mary, and so will be a great help to Mary and her child. They would raise the baby to be everything that Boyle was not. Yes, the women are more superior to the men. They are smarter and wiser. Although the men feel that they are in power, the women are "weaving their way through the woodwork". ?? ?? ?? ?? Gavin Williamson ...read more.