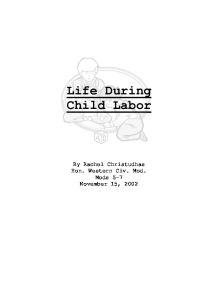 Life During Child Labor By Rachel Christudhas Hon. Western Civ. Mod. Mods 5-7 November 15, 2002 Life During Child Labor Outline 1. Intro 2. Types of Jobs a. Scavenger b. Piecer 3. Working Hours 4. Life In the Factory a. Food in the Factory b. Factory Pollution c. Punishments d. Accidents What Was Child Labor and It's Effects? Over the 100-year span between 1750 and 1850, Great Britain underwent many changes. This time period was known as the Industrial Revolution, which caused many inventions to be made as well as an increase in economic and population growth. One effect of the revolution was Child Labor. "Child Labor, term used to denote the employment of minors generally, especially in work that may interfere with their education or endanger their health" (Trager, 1996). Since child labor was around, children as young as the age of five would often work 13 to 16 hours a day. What was life like for a child working under such extreme conditions? To what extent would factory owners make children work? As a working child there were two types of jobs in a factory they could have. ...read more.

. .constantly in motion. . . . the chief weight of his body rests upon his right knee, which is almost always the first joint to give way." Many children often worked extreme hours each day and on March 16, 1832 a man by the name of Michael Sadler tried to propose a bill that limited the amount of hours children under age 18, worked to ten hours a day. This bill did not pass and in return Sadler found out that it was normal for children to work even twelve hours a day. During the 1800s not everyone had clocks in their house so children at times would be late to work and would get a severe punishment as well as deducted wages. Workers were not allowed to wear watches, which then led to the assumption that owners were trying to trick workers out of the money they owe. The rest of the life in the factory does not get much better. Factory owners were usually responsible for providing food for their workers. Child workers always complained about how bad the food was. ...read more.