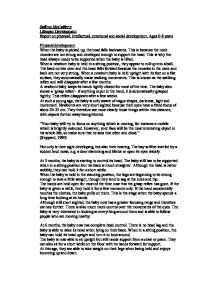 Saffron McCafferty Lifespan Development Report on physical, intellectual, emotional and social development. Ages 0-8 years Physical development When the baby is picked up, the head falls backwards. This is because the neck muscles are not strong and developed enough to support the head. This is why the head always needs to be supported when the baby is lifted. When a newborn baby is held in a sitting position, they appear to roll up into a ball. The back curves over and the head falls forward because the muscles in the neck and back are not very strong. When a newborn baby is held upright with its feet on a flat surface, they automatically make walking movements. This is known as the walking reflex and will disappear after a few months. A newborn baby keeps its hands tightly closed for most of the time. The baby also shows a 'grasp reflex'- if anything is put in the hand, it is automatically grasped tightly. This reflex disappears after a few weeks. At such a young age, the baby is only aware of vague shapes, darkness, light and movement. Newborns are very short sighted because their eyes have a fixed focus of about 20-25 cm. They therefore see most clearly those things within this distance, with objects further away being blurred. "Your baby will try to focus on anything which is moving, for instance a mobile which is brightly coloured. However, your face will be the most interesting object in his whole life, so make sure that he sees that often and close." ...read more.

They have learnt basic hygiene, e.g. washing and brushing their hair. Also, they can eat skilfully with a knife and fork Children over five years old can usually dress themselves, feed themselves, and manage without help in the toilet if the adults responsible for them have expected that they learn to do things this way. They can wash and bath themselves, but probably not to adult standards and therefore need help and some checking on teeth and hair. At age 6-7, they have an increased ability for complex movements such as shooting basketballs, dancing and playing the piano. Able to ride a two wheel bike, Can give name and address, and can tie shoe laces. Intellectual development A newborn baby will have very limited speech. They will use their voice to cry for food, affection, or because they are uncomfortable. Along with these, the baby will also make burbling noises as a mark of pleasure and contentment. One of the first kinds of words the baby learns is 'label words' which identify the names of things. At three months, the baby will immediately see a toy held above them. He will smile when you speak and will make squeals and gurgles of pleasure. There will be obvious signs of curiosity and what is going on around them. At feeding times, the baby will show signs of excitement. At 6 months, the baby will become very interested in mirrors and seeing themselves in one. He will begin to show preferences for certain foods that you offer him. A great variety of sounds can now be made such as 'goo', 'der', 'adah', and 'ka'. ...read more.

At 2 to 3 years of age, a child begins to test his limits and do what he has been forbidden to do, simply to see what will happen. The frequent "nos" that children hear from parents reflect the struggle for independence at this age. Although distressing to both the parent and child, tantrums are normal because they help children express their frustration during a time when they cannot verbalize their feelings well. Parents can help decrease the number of tantrums by not letting the child become overtired or frustrated, and by predicting the child's behaviour and avoiding situations that are likely to bring on tantrums. Some young children have particular difficulty controlling their impulses and need their parents to set stricter limits around which there can be some safety and regularity in their world. Between 2 and 3 years of age, children begin to play more interactively with other children. They may still be possessive about toys, but they may begin to share and even take turns in play. The child shows 'ownership' over a toy by saying, "That is mine!" which helps establish the sense of self. Although children of this age like independence, they still need their parents nearby for security and support; for example, they may walk away from their parents when they feel curious only to later hide behind their parents when they are scared. At 3 to 5 years of age, many children become interested in fantasy play and imaginary friends. Fantasy play allows children to safely act out different roles and strong feelings in acceptable ways. Fantasy play also helps children grow socially; they learn to resolve conflicts with parents or other children in ways that will help them vent frustrations and maintain self-esteem. ...read more.