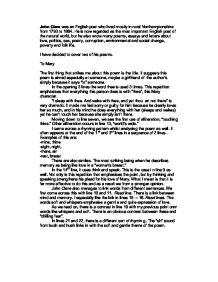 John Clare was an English poet who lived mostly in rural Northamptonshire from 1793 to 1864. He is now regarded as the most important English poet of the natural world, but he also wrote many poems, essays and letters about love, politics, sex, poetry, corruption, environmental and social change, poverty and folk life. I have decided to cover two of his poems. To Mary The first thing that strikes me about this poem is the title. It suggests this poem is aimed especially at someone, maybe a girlfriend of the author's simply because it says "to" someone. In the opening 3 lines the word thee is used 3 times. This repetition emphasises that everything this person does is with "thee", this Mary character. "I sleep with thee. And wake with thee, and yet thou art not there" is very dramatic. It made me feel sorry or guilty for him because he clearly loves her so much, and in his mind he does everything with her (sleeps and wakes) yet he can't touch her because she simply isn't there. ...read more.

As we read on, there is a contrast in line 19 with my previous point onm words like whispers and soft. There is an obvious contrast between these and "chilling fear". In lines 21 and 22, there is a different sort of rhyming. The "sh" sound from bush and hush links in with the soft and gentle theme of the poem. The first thing that struck me was that it was a form of a dramatic monologue, the speaker is addressing an implied listener, in this instant it is the mother addressing her unborn child. 9lines in each stanza = 9 months gestation period. I found that to an extent, the title could be be placed infront of each phrase or sentence. The title is also a contraction of the verb "you are". And Contraction links in with pregnancy and the poet acknowledges her unborn childs existence. When I say unborn, I am still unsure. At one point after reading the poem, I thought on the lines that this poem is clearly about a young child, who HAS been born. ...read more.

You could also say that it shows the condition of newly born baby, squirmy and writhing and all slippery because of natural fluid on them. Also, a baby doen't make use of its lung during its time in the womb and 2-3 minutes after its birth. In this cocoon the child is moving like "Mexican bean" producing "ripples" and at the same time growing as a "loaf". Despite such clear cut similes Plath insists that every thing is as "vague as fog" and to see the reality she has to wait long "from Fourth Of July to All Fool's Day" (nine months of pregnancy period) which seems as far off as Australia. Still she waits impatiently like a much awaited mail.Interestingly nothing will be written in that mail, it will be "a clean slate".But still it means the world to her which is again symbolised by Atlas with the world over his shoulders. It is clear that her child has already given her a lot of pleasure. Indeed she is very satisfied, "Right, like a well done sum". At last she feels complete and has feeling of existing, of being alive. ...read more.