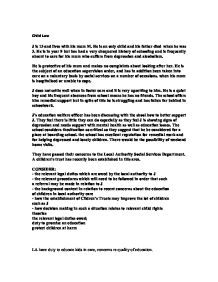 Child Law J is 13 and lives with his mum M. He is an only child and his father died when he was 3. He is in year 9 but has had a very chequered history of schooling and is frequently absent to care for his mum who suffers from depression and alcoholism. He is protective of his mum and makes no complaints about looking after her. He is the subject of an education supervision order, and has in addition been taken into care on a voluntary basis by social services on a number of occasions. when his mum is hospitalised or unable to cope. J does not settle well when in foster care and it is very upsetting to him. He is a quiet boy and his frequent absences from school means he has no friends. The school offers him remedial support but in spite of this he is struggling and has fallen far behind in schoolwork. J's education welfare officer has been discussing with the shool how to better support J. They feel there is little they can do especially as they feel J is showing signs of depression and needs support with mental health as well as education issues. The school considers thesituation so critical so they suggest that he be considered for a place at boarding school. ...read more.

A care order can only be made for children under 17 years of age (or 16 if the child is married). A care order stops if the child is adopted, and can only last until their 18th birthday. s.34 (1) stipulates that a child under a care order should be allowed reasonable contact with his parents unless it would be detrimental to his health, in Justin's case it would be highly likely that he would be able to see his mum over weekends. There has been much debate recently regarding the standard of education that children is care receive. Statistically, while "cared for" children are no less able than others, their educational success is shockingly low. Only about 6% can expect to achieve the benchmark of five GCSEs at grades A*- C, compared with around half of all young people nationwide, and only 1% go to university. http://education.guardian.co.uk/egweekly/story/0,,1885656,00.html It has been suggested that instead of staying in foster care and care homes whilst attending school, children may benefit from attending a boarding school. For Justin this may be beneficial, as as well as having superb educational facilites, Hopgarden also has an excellent reputation for helping depressed and isolated children like him. The ideal scenario for the LA and social services would be Justin's mother giving her permission for him to attend the boarding school. ...read more.

His physical, emotional and/or educational needs; c) The likely effect on him of any change in his circumstances; d) His age, sex, background and any characteristics of his, which the court considers relevant; e) Any harm which he has suffered or is at risk of suffering; f) How capable each of his parents and any other person in relation to whom the court considers the question to be relevant, is of meeting his needs; g) The range of powers available to the court under the Children Act 1989 in the proceedings in question. For all proceedings under the Children Act 1989 when the court considers a question of the child's upbringing the child's welfare is the court's paramount consideration. Justin has been in care on a voluntary basis by social services on a number of occasions, this is likely to be under s.20(1), where local authorities have the duty to provide accommodation for any child who is in need of accommodation due to several reasons. In Justin's case it would be because his mother was at the time prevented from providing him with suitable ccommodation or care. The essence of such arrangements is that they are voluntary so when his mum, who has parental responsibilty, may remove Justin at any time from the local authority care without giving notice. S.22(4) provides that before making any decision with respect to the child, the LA should accertain the wishes of both the parent and the child. ...read more.