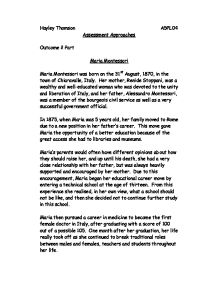 Hayley Thomson A5PL04 Assessment Approaches Outcome 2 Part Maria Montessori Maria Montessori was born on the 31st August, 1870, in the town of Chiaravalle, Italy. Her mother, Renide Stoppani, was a wealthy and well-educated woman who was devoted to the unity and liberation of Italy, and her father, Alessandro Montessori, was a member of the bourgeois civil service as well as a very successful government official. In 1875, when Maria was 5 years old, her family moved to Rome due to a new position in her father's career. This move gave Maria the opportunity of a better education because of the great access she had to libraries and museums. Maria's parents would often have different opinions about how they should raise her, and up until his death, she had a very close relationship with her father, but was always heavily supported and encouraged by her mother. ...read more.

She would give children enough freedom in a room which had been especially set up with loads of different activities, and the children aged between 4 and 6 years would choose to work rather than play, and teach themselves to read. Maria felt that a teacher should guide a child and shouldn't become an obstacle between the child and his experiences. 'The basic Montessori concepts are: * The teacher must pay attention to the child, rather than the child paying attention to the teacher * The child proceeds at his own pace in an environment controlled to provide means of learning * Imaginative teaching materials are the heart of the process * Each of them is self-correcting, thus enabling the child to proceed at his own pace and see his own mistakes.' ...read more.

had a great impact on today's learning as she is the person who is responsible for the child sized equipment and furniture which we have use of today. We also encourage children to learn a routine and help them to become capable of carrying out everyday activities with little supervision. I think I use Maria's method everyday when I am in my placement as I always encourage children to wash their hands before and after snack, and after using the toilet etc. I also try to help children remember their daily routine without actually telling them what should be done next, for example, after finishing a painting activity I will not tell the child to hang up his painting and then wash his hands, I would ask the child what he thinks should be the next step in the activity. ...read more.