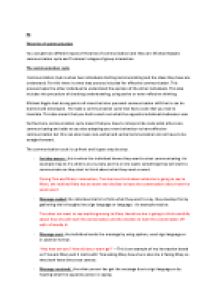 Mary has received the message and she smiles back this lets Tina know that she will respond back also Tina knows that the communication cycle hasn?t been broken. * Message decoded: now the individual decodes the individual?s message and understands what he or she is trying to say. During this the individual will make assumptions based on he or she?s body language. Mary has to reply back therefore she carefully thinks what she says back without sounding rude or she is not interested in the conversation she also makes sure that her facial expressions show that she wants a conversation to start. * Message understood: when the individual replies back this tells the individual that they have understood what the individual is saying. But it doesn?t that this has to happen during the first time. Tina and Mary?s conversation had no communication barriers because they understood what they were saying to each other and they gave a response back also they didn?t need to repeat themselves at all. ...read more.

I started off by saying good morning and then introducing what the activity was, straight away a child said they do not like marble painting and from there I found out the child doesn?t like getting their hands dirty. Storming: when the child mentioned he doesn?t like getting his hands dirty, I thought this would be a struggle for me and the activity wouldn?t go to plan because I had two more children to communicate with at the same time Norming: however slowly the child started to get more involved and this helped me communicate with him more because he started asking more questions e.g. if he can show the marble to his mum etc? from here the children worked as a group together. Performing : this stage was successful because despite the trouble at the beginning, the children worked together as a group and they became so interested in the activity, also they asked questions about the colours they can paint the marbles or if I could do the marble for them. Therefore we were an effective performing group because there were no communication barriers at all. ...read more.