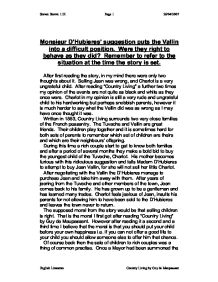 Monsieur D&amp;#146;Hubieres&amp;#146; suggestion puts the Vallin into a difficult position. Were they right to behave as they did? Remember to refer to the situation at the time the story is set.

Monsieur D'Hubieres' suggestion puts the Vallin into a difficult position. Were they right to behave as they did? Remember to refer to the situation at the time the story is set. After first reading the story, in my mind there were only two thoughts about it. Selling Jean was wrong, and Charlot is a very ungrateful child. After reading "Country Living" a further two times my opinion of the events are not quite as black and white as they once were. Charlot in my opinion is still a very rude and ungrateful child to his hardworking but perhaps snobbish parents, however it is much harder to say what the Vallin did was as wrong as I may have once thought it was. Written in 1883, Country Living surrounds two very close families of the French peasantry. The Tuvache and Vallin are great friends. ...read more.

The supposed moral from the story would be that selling children is right. That is the moral I first got after reading "Country Living" by Guy de Maupassant. However after reading it a second and a third time I believe that the moral is that you should put your child before your own happiness i.e. if you can not offer a good life to your child you should allow someone else to offer him that chance. Of course back then the sale of children to rich couples was a thing of common practise. Once a Mayor had been summoned the transaction would take only minutes, seeming to suggest that it was not something that society generally frowned upon. An added reason for uncertainty over whether to sell Jean would be the fact that the Tuvache had already declined the offer and that they would be likely to destroy their relationship with the perhaps regretful and jealous Tuvache. ...read more.

Monsieur Tuvache disagrees with his wife, when Charlot is wanted for sale. However instead of saying so he backs up his wife with nods and shakes of the head. Again it is Madam D'Hubieres that does all the talking about the adoption of Charlot and Jean until the question of money takes place whence her husband speaks. Also during this time it is Madam Vallin who talks about the price of losing her son Jean. Therefore this short story appears to promote the role of women in society. It is possible that Guy de Maupassant's close relationship with his mother may have led to this being the case. We can therefore see from this story that the values of olden times are far different from those now, or are they? Adoption? Fostering? Surrogate Mothers? Perhaps our modern day values are not as far away from those of yesteryear as we may like to think. Steven Brown 11H Page 1 28/04/2007 English Literature Country Living by Guy de Maupassant ...read more.