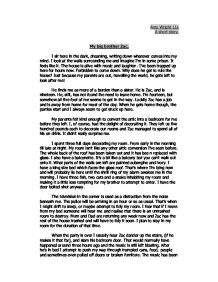 Amy Wright 11s A short story. My big brother Zac. I sit here in the dark, dreaming, writing down whatever comes into my mind. I look at the walls surrounding me and imagine I'm in some prison. It feels like it. The house is alive with music and laughter. I've been trapped up here for hours now. Forbidden to come down. Why does he get to rule the house? Just because my parents are out, travelling the world, he gets left to look after me! He finds me as more of a burden than a sister. He is Zac, and is nineteen. He, still, has not found the need to leave home. I'm fourteen, but somehow all five foot of me seems to get in the way. Luckily Zac has a job and is away from home for most of the day. When he gets home though, the parties start and I always seem to get stuck up here. ...read more.

I have three fish, two cats and a snake inhabiting my room and making it a little less tempting for my brother to attempt to enter. I have the door bolted shut anyway. The television in the corner is used as a distraction from the noise beneath me. The police will be arriving in an hour or so as usual. That's when I might drift to sleep, or maybe attempt to tidy my room. I fear that if I move from my bed someone will hear me and realise that there is an untrashed room to destroy. Mum and Dad are returning any week now and Zac has the rest of the house trashed and will have to tidy it soon. I plan to stay in my room for the duration of that time. When the party is over I usually hear Zac dander up the stairs, (if he makes it that far), and slam his bedroom door. ...read more.

I'll walk over and open the door. It was Zac, he is now lying at the bottom of my stairs and he is covered in blood. I think he was banging his head off the door. I'm writing this as I wait for ambulance to arrive. This is so typical. You may be wondering why I don't sound shocked or panicked. Mainly because this is the third time this week, but it really has nothing to do with me. I am going to leave for school and let the paramedics force their way in. I said goodbye to Zac and stepped over his lifeless body, not having a care in the world. As I left the house, (on time), the paramedics came charging in and that was the very last I saw of my big brother Zac. He died in the ambulance. Don't ask me why I don't care. He never cared about me so why should I care about him. I don't care if you find me shallow or horrid but you wouldn't understand. Trust me, you wouldn't. By Amy Wright 11s ...read more.