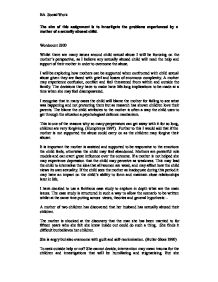 The aim of this assignment is to investigate the problems experienced by a mother of a sexually abused child. Wordcount 3300 Whilst there are many issues around child sexual abuse I will be focusing on the mother's perspective, as I believe any sexually abused child will need the help and support of their mother in order to overcome the abuse. I will be exploring how mothers can be supported when confronted with child sexual abuse given they are faced with grief and losses of enormous complexity. A mother may experience confusion, conflict and feel threatened from within and outside the family. The decisions they have to make have life-long implications to be made at a time when she may feel disempowered. I recognise that in many cases the child will blame the mother for failing to see what was happening and not protecting them but as research has shown children love their parents. The blame the child attributes to the mother is often a way the child uses to get through the situation a psychological defence mechanism. This is one of the reasons why so many perpetrators can get away with it for so long, children are very forgiving. (Humphreys 1997). Further to this I would add that if the mother is not supported the abuse could carry on as the children may forgive their abuser. It is important the mother is assisted and supported to be responsive to the emotions the child feels, otherwise the child may feel abandoned. Mothers are powerful role models and can exert great influence over the outcome. If a mother is not helped she may experience depression that the child may perceive as weakness. ...read more.

All feel threatened in that their children may have been put at risk. Humphreys (1997) believes this is because child sexual abuse allegations challenges the notion of social cohesion based around a protective family. Mothers are accorded blame by some who believe that the sexual abuse has been caused by problems in the marriage that has caused her to withdraw from a sexual relationship with the husband, who begins drinking and sexually assaulting the nearest substitute. (Howitt 1995) But from a feminist perspective it can be argued that many women withdraw from a sexual relationship but this does not lead to child sexual abuse. They point to the extent of responsibility attributed to women for their children as opposed to the unequal amount by men. (Hooper CA, Humphreys C 1998) And ask why should women be responsible for the behaviour of their adult partners? Feminists argue that responsibility for sexual abuse be located with the offender. (Hooper CA, Humphreys C 1998) They point to this undermining of the mother of the sexually abused child owing something to the many forms of patriarchal discourses within society. From a sociological perspective it can be said that the social construction of a family as 'private' with outside intervention avoided results in many women feeling isolated and disempowered at a time when action is needed against their partners. Despite this statistics show that non-abusing parents - usually mothers are the most frequent referrs of child sexual abuse incidents to the authorities. (Sharland et al 1995, Packman et al 1986) With more social work intervention using family therapy new constructions of sexual abuse have developed that focuses on the dysfunctional family rather than the deviant abuser. ...read more.

I have realised that it would be a natural reaction to feel angry as a social worker in this type of case but these type of feeling need to be explored and dealt with if sensitive quality work is to be undertaken. Having an understanding of some of the issues highlighted in the case study could facilitate a better outcome for the family rather than just debating the opposing theories between feminists and family therapy ways to consider how the social, individual and interpersonal interactions relate. But exploring the issues raised in this assignment need time and money and recent research suggests that this area is being neglected (Farmer and Owen 1995). But Messages from Research when emphasising the need for practitioners to focus on contexts, which may be harmful to the child rather than on abusive events, may be helpful. Research and theories in this area when analysed reveal their limitations at understanding, and offering solutions in such complex situations. Generalisations and stereotyping should be avoided, mistakes as in Cleveland investigated so as to inform future practice and I would argue for sustained ongoing support for both mother and child. It has proven difficult to maintain the focus of this assignment given the many issues that become evident once the subject is explored I feel I have only given an overview of a complex thought provoking subject. Which means for practice there are no simple solutions, no practice guidelines to underpin practice, therefore understanding and applying social work values and ethics are even more crucial than ever. I have learned that if we ignore the strength of the mother we lose the best resource a child has of overcoming the effects of sexual abuse. ...read more.