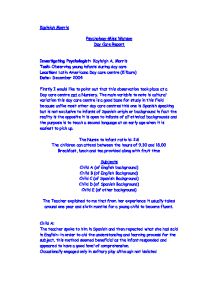 Kayleigh Morris Psychology-Miss Watson Day Care Report Investigating Psychologist: Kayleigh A. Morris Task: Observing young infants during day care Location: Latin Americana Day care centre (Kilburn) Date: December 2004 Firstly I would like to point out that this observation took place at a Day care centre not a Nursery. The main variable to note is cultural variation this day care centre is a good base for study in this field because unlike most other day care centres this one is Spanish speaking but is not exclusive to infants of Spanish origin or background in fact the reality is the opposite it is open to infants of all ethnical backgrounds and the purpose is to teach a second language at an early age when it is easiest to pick up. The Nurse to infant ratio is: 2:6 The children can attend between the hours of 9.30 and 18.00 Breakfast, lunch and tea provided along with fruit time Subjects Child A (of English background) Child B (of English Background) Child C (of Spanish Background) ...read more.

Child D: The oldest of the group she is fluent in Spanish and English and this is conveyed through her confidence with peers and staff, she displayed some obvious leadership skills but also was willing to help the younger children. Child E: Seemed to have benefited immensely to this type of day care and was an exceptionally fast learner, as he was only two years of age and fluent in both Spanish and English. One of the most noticeable things about the centre was the environment itself because unlike the traditional nursery will one larger space this centre had several different spaces for the children to explore and they were never restricted to a particular space. All of the children have their own coat peg that is personalised with their name and photograph. One of these was a room specifically tailored for the infants to nap in it consisted of padded walls, small mattresses with duvets and pillows, was central heated and at nap time the children were played stimulating French classical music. ...read more.

I had previously thought that the children would be confused, the linguistic skills would be in two languages but neither would be developed however this was not the case, the English children particularly picked up on Spanish quickly and were able to communicate with no problems differentiating between the two languages. My main worry was that there would be a strong segregation between the mother tongued English and Spanish children again I was proved wrong because the children all interacted affectionately with one another and their differing background cause no problems this is what I actually think makes the day care work so well; the variation of children in attendance as they all learn from one another and are enriched by this. I conclude that the most important factor in day care is the sheer quality of it, the centre I visited was of an exceedingly high standard but one must remember not all day care is and the adjustment and suitability to day care is individual to each and every child. Dr Kayleigh Morris 04 ...read more.