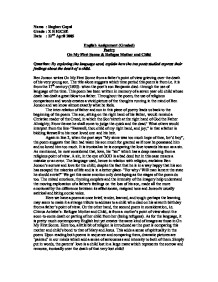 On My First Sonne &amp; Refugee Mother and Child Question: By exploring the language used, explain how the two poets studied express their feelings about the death of a child.

Name : Raghav Goyal Grade : X B IGCSE Date : 22nd April 2005 English Assignment (Graded) Poetry On My First Sonne & Refugee Mother and Child Question: By exploring the language used, explain how the two poets studied express their feelings about the death of a child. Ben Jonson writes On My First Sonne from a father's point of view grieving over the death of his very young son. The title alone suggests which time period this poem is from i.e. it is from the 17th century (1603)- when the poet's son Benjamin died- through the use of language of the time. This poem has been written in memory of a seven year old child whose death has dealt a great blow to a father. Throughout the poem, the use of religious comparisons and words creates a vivid picture of the thoughts running in the mind of Ben Jonson and we know almost exactly what he feels. The inter-relation of father and son in this piece of poetry leads us back to the beginning of the poem. The son, sitting on the right hand of his father, would remind a Christian reader of the Creed, in which the Son 'sitteth at the right hand of God the Father Almighty; From thence he shall come to judge the quick and the dead.' ...read more.

Coming to the technical aspects of the poem, the "B" sound shows the harsh reality that is life and "death" and suffering (in this case at the camp). The three Bs in the lines "...bottoms struggling...blown empty bellies." are expressed in a tough manner when the poet could have easily used soft sounding words. That would take away the "feel" of the poem. The technical aspects also contribute a lot to the atmosphere in the poem. The use of long sentences, adds a sense of the dull, remorseful, unhealthy, negative atmosphere. This is in contrast to the short sentences with a definite rhyme scheme in On My First Sonne. In this case the short sentences add a rhythm to the poem which brings out the content as even more serious. Like a race with time to forget something sad. The "rust colored hair left" proves to be another situation that illustrates the under-nourishment of the child and the lack of food. In a way it shows the unnatural situation as iron only rusts when it is 'worn-out'. The word "skull" is also disturbing (instead of using word "head") and it reflects back to the previous line where the writer mentioned "ghost smile", hence by showing these two images in joint relation to death, the writer shows that the fate of her child dying is near. ...read more.

Here is Ben Jonson at his least arrogant.' At this point, he is willing to let the sorrow pass and turn over a new leaf which is negative yet better as compared to this emotional blow. While over here, Jonson is willing to never again love somebody as much so as to avoid facing this misery again. This is brought out through the last two lines of the poem. Contrastingly, in Refugee Mother and Child, the mother still showed her love and affection towards the child in the last few days. She cannot let go as easily. Most mothers would in this situation have lost hope and would have "ceased / to care..." but not her. She would 'fight' this sorrow till the end. Both poems hence clearly depict the true feelings about the death of a child. We get the perspective from two points of view in either case i.e. from a mother's and a father's point of view and the feeling before and after the death of a child. The language used is very specific and has been used in the most appropriate contexts. Sorrow and remorse are the main themes of both poems along with death of a child, yet there is another shadow of a theme i.e. the 'sin' of loving the child so much which causes almost endless grief in the end. ...read more.