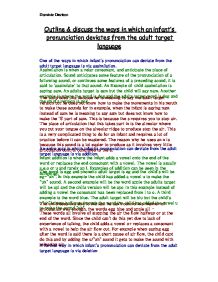 Outline &amp; discuss the ways in which an infant's pronunciation deviates from the adult target language

Outline & discuss the ways in which an infant's pronunciation deviates from the adult target language One of the ways in which infant's pronunciation can deviate from the adult target language is via assimilation. Assimilation is when a velar consonant, and anticipate the place of articulation. Sound anticipates some feature of the pronunciation of a following sound, or continues some features of a preceding sound, it is said to 'assimilate' to that sound. An Example of child assimilation is saying sam. An adults target is sam but the child will say nam. Another example is where the word is dog and the adults target word is dog and the child's version is gog. The child does this because he is meaning to say the adult target version but he does not know how to make the movements in his mouth to make those sounds for in example, when the infant is saying nam instead of sam he is meaning to say sam but does not know how to make the 'S' part of sam. ...read more.

Since the child can't do this yet due to lack of experience of talking, the child adds a vowel or replaces a consonant with a vowel to help the air flow out. For example when saying egg after the word is said there is a short pause of air flow, the child cant do this and by adding the u/"uh" sound it gets to make the sound with releasing air. A further way in which infant's pronunciation can deviate from the adult target language is via deletion Deletion is the removal of a stage of a word which usually involves consonant clusters. For example for the word behind the adult target is be-'hind where the child's version is hind in this example the "be" at the begging of the word has been deleted. Another example is the word without the adult target is with-'out and the child's version is out in this case the second stage of the word has been deleted. A third example of this is the word difficult the adult's version is dif-l-kult and the child's dif-kult. ...read more.

The only reason it is swapped is for its easier manner of articulation. One more way in which infant's pronunciation can deviate from the adult target language is via gliding. Gliding is where the liquid manner of articulation changes to a glide manner of articulation. This tends to happened at the beginning or the end of the word for example the word lady the adult version is lady and the child's version is yady here the l has been swapped with the consonant y. An example where this happens in the middle of the word is the word horrible the adults target version is horabul where the child's version is howabul or hoyabul. In this case the r sound has been changed to a w or a y. The child does this because liquid sounds need complex movement in the mouth and therefore they find it a lot harder to produce these sounds for example in the word lady --> yady. The L sounds requires a complex flick of the tongue from the upper teeth to the lower teeth. It is a lot easier to say a y which involves little movement of the tongue. Dominic Davison ...read more.