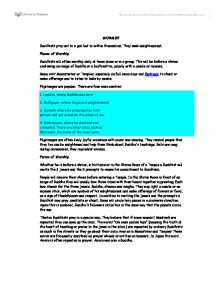 WORSHIP Buddhists pray not to a god but to within themselves. They seek enlightenment. Places of Worship Buddhists will often worship daily at home alone or in a group. This will be before a shrine containing an image of Buddha or a bodhisattva, usually with a candle or incense. Many visit Monasteries or Temples, especially on full moon days and festivals, to chant or make offerings and to listen to talks by monks. Pilgrimages are popular. There are four main centres: 1. Lumbini, where Buddha was born 2. Bodhgayar, where he gained enlightenment 3. Sarnath where he preached his first sermon and set in motion the wheel of law. 4. Kushinagara, where he died and was cremated. There are other sites such as Dharasala ,the home of the Dalai Lama. Pilgrimages are often lively joyful occasions with music and dancing. They remind people that they too can be enlightened and help them think about Buddha's teachings. Bells are rung during ceremonies, they represent wisdom. Forms of Worship Whether he is before a shrine, in his home or in the Shrine Room of a Temple a Buddhist will recite the 3 jewels and the 5 precepts to renew his commitment to Buddhism. People will remove their shoes before entering a Temple. In the Shrine Room in front of an image of Buddha they will usually bow three times with their hands together in greeting. Each bow stands for the three jewels, Buddha, dharma and sangha. They may light a candle or an incense stick, which are symbols of his enlightenment and make offerings of flowers or food, as a sign of thankfulness and respect. In addition to reciting the jewels and the precepts a Buddhist may pray, meditate or chant. Some will circle holy places in a clockwise direction. Again this is symbolic. Buddha's followers circle him in the same way that the planets circle the sun Tibetan Buddhists pray in a special way. ...read more.

Avalokitesvara's (Kuan Yin) Birthday This is a festival which celebrates the Bodhisattva ideal represented by Avalokitesvara. Who represents the perfection of compassion in the Mahayana traditions of Tibet and China. It occurs on the full moon day in March. Background The Buddhist Diet can best summed up in one word which is vegetarian. However, with that said, it is important to state that there are no hard rules. Vegetarianism has become closely associated with the Buddhist Diet, but it is not an absolute. Buddhists believe in non-violence and to this end, many Buddhists refrain from consuming meat. As a general rule, a large percentage of Buddhists are vegetarians. A diet based largely on fruits and vegetables is one that is often sited as being a healthy one that likely increases life span. What to Eat Those on the Buddhist Diet will often focus on vegetables and fruits. Wheat and soy are also common staples of the diet. Considering the nutritional benefits of a largely fruit and vegetable diet, the Buddhist Diet has a great deal to offer. Since they believe in the possibility of being reincarnated as an animal, Buddhists are vegetarian. And they avoid alcohol and other stimulants, since these products diminish clarity of the mind. The more complete reason for being vegetarian is ethical. There are five main precepts in Buddhism (however monks and nuns follow many more related to their monastic life), and the first precept - "I take the vow not to intentionally kill any living being" - is adhered to by all Buddhists Medication/health Buddhists believe that the body, which is a temporary shell for the spirit, should be treated with great respect and care so the mind can concentrate on pursuing enlightenment. Some believe that people who are spiritually focussed and who follow a faithful regimen of meditation, diet, and exercise will not become sick. If illness does occur, many Buddhists believe that 80% of the time it can be cured using the mind and 20% of the time it can be cured using herbs. ...read more.

Hindus believe that for true service to God, purity of food is necessary to maintain the desirable state of mind that leads to enlightenment. Food is consumed not only to survive but also to stay healthy and maintain mind/body equilibrium. By eating a purer quality of food, such as a Sattvic diet, and regulating food consumption, one can ensure a pure heart, long life, cheerful spirit, strength, health, happiness and delight. Good and pure food promotes a peaceful-not agitated-mind, which is needed to see the Truth as the Truth. Sin, or an agitated state of mind, prevents the journey to moksha (divine supreme knowledge, which leads to freedom from the cycle of birth, life, death and rebirth). Some specific Hindu dietary customs and practices include the following: * A true devotee will refuse to accept any food that is not offered first to God. Gaining God's blessing before consuming the food is essential. Hindus may do this is by placing their daily food before the particular deities they worship and by reciting shlokas(prayers). Once the food is offered to God, it is eaten as prasad or blessed food. * Before starting any daily meal, a devout Hindu first sprinkles water around the plate as an act of purification. * Five morsels of food are placed on the side of the table to acknowledge the debt owed to the devta runa (divine forces) for their benign grace and protection. * For a child's birthday celebration, the sacred symbol "OM" is added onto the birthday cake along with "Happy Birthday." Also, a lamp is lit instead of having the child blow out the candles. In the Hindu faith, lighting a lamp is symbolic of new life, a new beginning or the spreading of knowledge. Health/Medical Beliefs Hindus have a great respect for medical professionals, but many are quite wary of drugs and pills. If drugs are given, try to explain what it is for and what the effects are. Natural and homeopathic medicine is preferred over drugs and surgery in most cases. Many Hindu diabetics do not take insulin made from animals. ...read more.