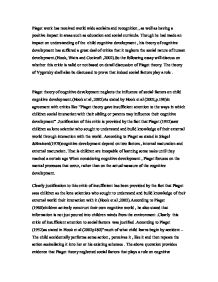 . Piaget felt that a baby is an active and curious organism, that reaches out and seeks to regulate a balance between assimilation and accommodation. This balance is what Piaget describes as equilibrium. Piaget considered the process of equilibrium an important factor in the cognitive growth and development of a child.(Piaget , 1952) This was the ground were he was criticize because he said that children must be allowed to do their own learning(Piaget,1952). Lourenco & Machado (1996)in defense of Piaget theory realized that Piaget has took into consideration the fact that humans progressively develop or mature to higher states of cognitive development and realized that children acquire knowledge transmitted by parents, teachers ,and books, Piaget called this "social transmission." Piaget believed that when a child hears contradictory statements that challenge established schemes, equilibrium is disturbed. Piaget called such a disruption in equilibrium cognitive conflict or disequilibrium. When children experience cognitive conflict they set out in search of an answer that will enable them to achieve states of equilibrium.(Lourenco & Machado,1996) Justification of this critique was also provided by Vygotsky theory of development .Vygotsky (1929) believes that adults and child's peers are involved in shaping cognitive development of the child. As stated by Vygotsky (1929) through social activities a child learns cultural tools and social inventions .These according to Vygotsky (1929) includes language, rules and counting. Vygotsky theory is one theory that has provided justification to the critics that Piaget gave insufficient attention to social factors. ...read more.

The concrete operational stage is the third stage in Piaget's theory. This stage typically occurs between the ages of 7 and 12(Hook et al , 2002) During this stage, the child begins to reason logically, and organise thoughts coherently. However, they can only think about actual physical objects, they cannot handle abstract reasoning. This stage is also characterized by a loss of egocentric thinking. During this stage, the child has the ability to master most types of conservation experiments, and begins to understand reversibility.(Piaget 1952,Maier,1978 and Hook et al , 2002). The concrete operational stage is also characterized by the child's ability to coordinate two dimensions of an object simultaneously, arrange structures in sequence, and transpose differences between items in a series. The formal operational stage is the fourth and final stage in Piaget's theory. It begins at approximately 11 to 12 years of age, and continues throughout adulthood, although Piaget does point out that some people may never reach this stage of cognitive development. The formal operational stage is characterized by the ability to formulate hypotheses and systematically test them to arrive at an answer to a problem. The individual in the formal stage is also able to think abstractly and to understand the form or structure of a mathematical problem. Another characteristic of the individual is their ability to reason contrary to fact. That is, if they are given a statement and asked to use it as the basis of an argument they are capable of accomplishing the task. For example, they can deal with the statement "what would happen if snow were black". ...read more.