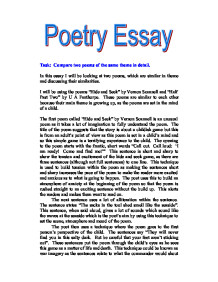 Task: Compare two poems of the same theme in detail. In this essay I will be looking at two poems, which are similar in theme and discussing their similarities. I will be using the poems "Hide and Seek" by Vernon Scannell and "Half Past Two" by U A Fanthorpe. These poems are similar to each other because their main theme is growing up, as the poems are set in the mind of a child. The first poem called "Hide and Seek" by Vernon Scannell is an unusual poem as it takes a lot of imagination to fully understand the poem. The title of the poem suggests that the story is about a childish game but this is from an adult's point of view as this poem is set in a child's mind and so this simple game is a terrifying experience to the child. The opening to the poem starts with the frantic, short words "Call out. Call loud: 'I am ready! Come and find me!'" This sentence is short and sharp to show the tension and excitement of the hide and seek game, as there are three sentences (although not full sentences) to one line. ...read more.

I will now look at my next poem. In the poem "Half Past Two" by U A Fanthorpe it describes a child growing up in a world without time. He doesn't know how to tell what the time is and the only times that he knows are the times of specific moments or routines in his daily life. The title shows that this poem is going to be about time so therefore this title represents the basis for the story. The poem starts as if it is in a child's fairytale with the line "Once upon a schooltime". This line doesn't use very good English as the word "schooltime" is said incorrectly. It is written how it is said which shows how this child sees the times. The child sees them as if the sentences are words. This is typical child behaviour and so the poet's aims are to try to put this action into a word. This makes the reader feel as if the reader is the child and is feeling and experiencing the bad time that the child is having with his times. This quote also has a reference to a child's life as it starts with "Once upon a school time" which gives the impression of a child's fairytale. ...read more.

The final stanza is a very dramatic one. It says "but he never forgot how once by knowing the time, he escaped into the clockless land of ever, where time hides tick-less waiting to be born". This ending, in my opinion, is very effective and I think it is a very good way to finish the poem. It makes the reader imagine this weird place which the poet is trying to describe and makes the reader imagine that he or she is in this place. In comparison of the two poems, I can clearly say that both poems are very alike. They are both targeted to an older audience so that they can be the modern child as most people of an older age are curious as to what it is like and would like to step in the child's shoes. Both the poems are also told from the child's view so that the reader gets to know more about the child. The poems also both use personification because at such a young age many simple objects can come alive really easily as the modern child has a wide imagination and can, if he or she wants to, make simple things come alive. Therefore, in conclusion, I can say that these poems both have the same theme, which is growing up and coping with growing up. By Oliver Jarvis ...read more.