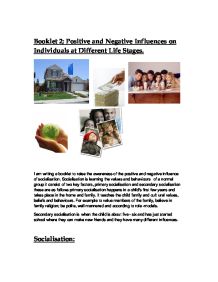 Positive and Negative Influences on Individuals at Different Life Stages.

Booklet 2; Positive and Negative Influences on Individuals at Different Life Stages. I am writing a booklet to raise the awareness of the positive and negative influence of socialisation. Socialisation is learning the values and behaviours of a normal group it consist of two key factors, primary socialisation and secondary socialisation these are as follows primary socialisation happens in a child's first few years and takes place in the home and family. It teaches the child family and cultural values, beliefs and behaviours. For example to value members of the family, believe in family religion; be polite, well mannered and according to role-models. Secondary socialisation is when the child is about five- six and has just started school where they can make new friends and they have many different influences. Socialisation: The positives effects of primary socialisation are, when you grow up around your mother and father you learn how to talk, maybe different languages, to walk, ways of interacting, you may learn manners and more about your surroundings. The negative effects of primary socialisation are, when a child is growing up, they tend to pick up on things their parents do easily and like to copy for example when a child/toddler sees their parent ironing they may get out a mini iron and copy their parents. ...read more.

A friend who has a bad influence can bring a teenager to have bad experiences in their life. But this helps them to learn from their mistakes. Media The media has many different good and bad points to it. A positive effect could be the media keeps the public aware of everything that goes on around us. Also it boost the confidence of people. Also it makes us culturally aware and brings things to our attention like for example when they raise money for many different causes can have amazing effect on the people that really need it. But on the negative side, the media can intrude into someone's privacy and cause trouble for many people. Also they exaggerate or lie about things to the public just to make it their front-page or to make more people buy or watch their programmes/magazines. It has bad role models causing things like anorexia, plastic surgery/cosmetic surgery. As well as good role models. Culture and Gender Culture and Gender have a few similarities, for example they both suffer stereotyping. Culture include many different ways of living for example a Caribbean culture still uses beats as a form of punishment in schools which doesn't happen in the UK culture anymore. Life Events Living a successful life involves having to cope with change. ...read more.

Some good work presented here regarding the various things that can impact upon someone positively and negatively. Generally examples are given to support the points made, but there are a few instances of assumptions being made, eg. people who work must have childcare issues. It is important to keep a balanced view. In terms of the structure, perhaps the negative effects could have been presented with the positive effects as one long piece of work. This would improve the structure. There are some grammar and homophone errors, so careful proof-reading is required.