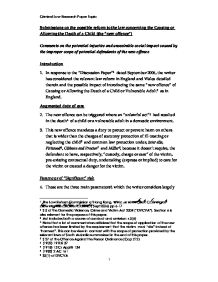 Submissions on the possible reform to the law concerning the Causing or Allowing the Death of a Child (the "new offence") Comments on the potential injustice and unsesirable social impact caused by the improper scope of potential defendants of the new offence Introduction 1. In response to the "Discussion Paper"1 dated September 2006, the writer has considered the relevant law reform in England and Wales detailed therein and the possible impact of introducing the same "new offence" of Causing or Allowing the Death of a Child or Vulnerable Adult2 as in England. Augmented duty of care 2. The new offence can be triggered where an "unlawful act"3 had resulted in the death4 of a child or a vulnerable adult in a domestic environment. 3. This new offence mandates a duty to protect or prevent harm on others that is wider than the charges of statutory protection of ill-treating or neglecting the child5 and common law protection under, inter alia, Pittwood6, Gibbons and Proctor7 and Miller8, because it doesn't require, the defendant to have, respectively, "custody, charge or care" of the victim, pre-existing contractual duty, undertaking (express or implied) to care for the victim or created a danger for the victim. ...read more.

The lack of statutory defence would widen the door of injustice. This is especially so where the charge is being laid against an abused young parent who is under the age of 16. Social Implications - distorting present interpersonal social relationship 25. The new offence has a significant potential of distorting he present interpersonal social relationship in the following ways. 26. On one hand, people will be discouraged from bearing, rising or offering help take care of children or the vulnerable in order to avoid the risk of being caught under such a wide and uncertain offence. 27. This difficulty is particularly relevant to Hong Kong where there are an increasing number of single parents who has relied on relatives or child care workers to look after the children so that he/she can return to work.17 28. On the other hand, for obvious reason, people in the society will be encouraged to stay away from, instead of helping, ones showing a certain tendency to violence, where such tendency may originally be ratified through mutual support between people, relatives, couples and friends. Conclusions 29. The writer understands that the new offence is made with a view to deter members of the society from their abusive acts, and impose an legal duty on persons close to children or the vulnerable to engage into positive steps to protect the children and the vulnerable. ...read more.