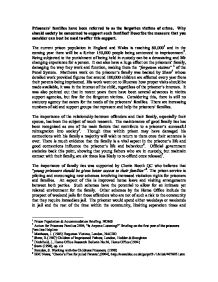 Prisoners' families have been referred to as the forgotten victims of crime. Why should society be concerned to support such families? Describe the measure that you consider can best be used to offer this support.

Prisoners' families have been referred to as the forgotten victims of crime. Why should society be concerned to support such families? Describe the measure that you consider can best be used to offer this support. The current prison population in England and Wales is reaching 80,0001 and in the coming year there will be a further 150,000 people being sentenced to imprisonment2. Being subjected to the punishment of being held in custody can be a devastating and life changing experience for a person. It can also have a huge effect on the prisoners' family, damaging the way they work and function, making them the "forgotten victims" 3 of the Penal System. Matthews work on the prisoner's family was backed by Shaw4 whose detailed work provided figures that around 100,000 children are affected every year from their parents being imprisoned. His work went on to illustrate how proper visits should be made available, it was in the interest of the child, regardless of the prisoner's interests. It was also pointed out that in recent years there have been several advances in victim support agencies, but few for the forgotten victims. Considering this, there is still no statutory agency that caters for the needs of the prisoners' families. There are increasing numbers of aid and support groups that represent and help the prisoners' families. ...read more.

It is vital that the family receive honest, reliable information from the solicitor, so they can prepare for the worst which would be the family member sentenced to custody. It would be possible that at this stage that the solicitor put the family in contact with suitable support groups that could aid their struggle form the outset. The Probation Service and probation volunteers can be used as outlet for the family, though a study in 1989 found that only 19% of the families used in the study were contacted at this stage by the probation service17. There are some organisations, which offer support for the family, support that only arose after recommendations, in the 1988 national conference18 in Bristol. The families ordeal continues throughout the custody sentence, bringing further issues into light, including problems with visiting the prisoner, financial difficulties rehabilitation courses and, as mentioned the breakdown of the relationship, especially that between the child and the parent. Help for the families can be found in support groups. These are fundamental in helping the family cope with the situation. They give advice, information that is vital to aid the family in getting over the emotional and practical difficulties that imprisonment can cause. The group, Action for Prisoners Families (APF) is an example of such an umbrella group, they have a helpline that is available for the families. ...read more.