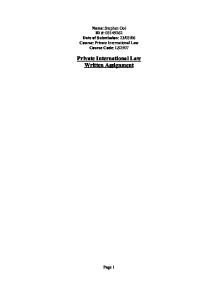 Name: Stephen Ooi ID #: 03149262 Date of Submission: 23/03/06 Course: Private International Law Course Code: LS2507 Private International Law Written Assignment The word domicile is notoriously difficult to define; having multiple meanings depending on what area of law one is looking at. Even within private international law the word has differing meanings depending on which country you are in or what piece of legislation is being looked at. This presents problems both nationally and internationally and therefore it's important to determine what issues are raised in any potential problem allowing you to select the correct definition of the word. The question put before me is asking in general terms where the permanent home of the individuals in question is, his "centre of gravity"1. Multiple factors have to be taken into account when attempting to come to a conclusion. Taking all surrounding factors into account it will thus be easier to determine each persons domicile individually. To aid in determining the domicile it is necessary to look at the individual rules governing domicile, namely; the domicile of origin, domicile of dependence and the domicile of choice. It should however be noted that a person may only have one domicile for a set purpose and that there is always a presumption in favour of an existing domicile and any burden of proof lies on behalf of the party ...read more.

The final aspect of domicile is acquiring and loosing a domicile of choice. It must be stated that a person must be over 16 to be able to acquire such domicile. Such domicile can only be obtained by residing in the country with the intention on staying permanently or indefinitely. Residence is relatively easy to establish, with mere inhabitance often taken to be residence. There is no set time laid down8 and thus it must be looked at differently for each case depending on the facts. Intention is somewhat more difficult. The notion of staying permanently or indefinitely is vague by nature and thus each case must be looked at upon the facts. A domicile cannot be obtained if the person only stays upon a contingency. In recent times this view was relaxed and if such contingency is vague then a domicile may be acquired. Such contingencies play no role in the problem given and thus do not require anymore explanation. Other connecting factors must be taken into account, such as the purchase of property, getting a job, interacting with the community and more besides. All these must be looked at. The intention to stay must be freely formed and not coerced in any way.9 Finally a person may loose their domicile of choice if; there is cessation of residence and cessation of intention to stay. ...read more.