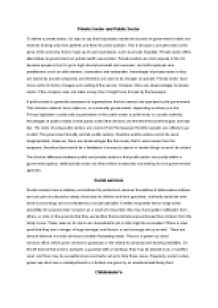 Transfer-Encoding: chunked ﻿Private Sector and Public Sector To define a private sector, it?s easy to say that it operates outside the bounds of government control and receives funding only from patients and their insurance policies. This is because a private sector is the piece of the economy that is made up of care businesses, such as private hospitals. Private sector offers alternatives to government-run public health care system. Private sectors are most popular in the UK because people in the UK go to high street pharmacist and nurseries, and self-employed care practitioners, such as child-minders, counsellors and osteopaths. Advantages of private sector is they are owned by private companies and therefore are seen to be cheaper to operate. Private sector have more control in terms of wages and costing of the service. However, there are disadvantages to private sector; if the company does not make money than it might have to back by the taxpayers. A public sector is generally composed of organisations that are owned and operated by the government. This includes national, local, state-run, or community governments, depending on where you live. Privacy legislation usually calls organisations in the public sector a public body or a public authority. ...read more.

Childminder’s A childminder is someone that works with children for more than two hours a day in their own home for a reward, childminder’s register with Ofsted to grantee a child’s safety. An example of a childminder is someone who would drive children in their cars, they would have to have a public liability insurance. Childminder don’t work home to look after children because all childminders are regularly monitored by Ofsted, and often by their local authority, and must by law. Parents are always informed about how they can make a complaint against a childminder if they suspect something happening to their children. Childminders charge an average of £3.84 per child per hour. Childminders are self-employed, so no tax is included in the fee. KOOSA KOOSA holds holiday activity for children 3-5 year olds, so every child participating in the activities would be a meeting their social, intellectual, emotional and physical needs. The child would feel accepted so would have confidence when performing an activity because their self-esteem and self-concept would increase due to being praised and encouraged by staff. The child social needs would be meet due to them interacting with new people in the same life stage as themselves so they would be building a friendship with other children. ...read more.

This would help the child to build a friendship with other children in the same life stage. Their emotional need would be met by the child feeling different range of emotion; they would be overwhelmed with joy, happiness, and excitement. The child would feel proud if they were praised by their mother or the instructor. The intellectual need of a child would be fulfilled by the child learning a new surrounding and the new activities taught to them, for example nursery rhythms. This would also increase the amount of words children know, increase on their vocabulary. The child?s physical need would be fulfilled by contributing to the activities such as tag. There are a wide range of mother and toddler groups in the UK who contribute to a child?s emotional, physical, social and intellectual development. Toy Library A toy library provides resources for play, trained staff and dedicated space. Toy library can be functioned by individuals, charitable organisations, local, regional or national governments or any other such agency or group. Toy libraries that are run by charities or government institutions mostly offer a free service or there may be a minimal charge. Those run by individuals may charge a fee. This lets children have the chance to play with the provided by the library. Reference: http://www.childmindinghelp.co.uk/whatischildminding.html http://www.pacey.org.uk/childminders/become_a_childminder.aspx#StepOne https://www.childcare.co.uk/information/what-is-a-childminder http://www.koosakids.co.uk/aboutus.aspx http://find.redbridge.gov.uk/kb5/redbridge/fsd/parents.action?parentschannel=3904 http://www.familylives.org.uk/advice/your-family/parenting/social-services-and-your-family/ http://en.wikipedia.org/wiki/Public_sector ...read more.