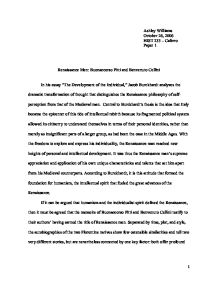 Ashley Williams October 26, 2006 HIST 233 - Caferro Paper 1 Renaissance Men: Buonaccorso Pitti and Benvenuto Cellini In his essay "The Development of the Individual," Jacob Burckhardt analyzes the dramatic transformation of thought that distinguishes the Renaissance philosophy of self-perception from that of the Medieval man. Central to Burckhardt's thesis is the idea that Italy became the epicenter of this tide of intellectual rebirth because its fragmented political system allowed its citizenry to understand themselves in terms of their personal identities, rather than merely as insignificant parts of a larger group, as had been the case in the Middle Ages. With the freedom to explore and express his individuality, the Renaissance man reached new heights of personal and intellectual development. It was thus the Renaissance man's supreme appreciation and application of his own unique characteristics and talents that set him apart from his Medieval counterparts. According to Burckhardt, it is this attitude that formed the foundation for humanism, the intellectual spirit that fueled the great advances of the Renaissance. If it can be argued that humanism and the individualist spirit defined the Renaissance, then it must be agreed that the memoirs of Buonaccorso Pitti and Benvenuto Cellini testify to their authors' having earned the title of Renaissance men. ...read more.

Cellini ultimately developed such an intimate relationship with the monarch that Francis would often address him as "mon ami," an almost unheard-of courtesy for royalty to extend to a commoner (Cellini, 288). Pitti's relationship with the French royal family, although remarkable for his era, pales in comparison to the level of intimacy that Cellini and Francis I shared. In addition to glorifying his artistic achievements and prominent social connections, Cellini steps beyond the strict factual accounts seen in Pitti's memoir, choosing to spice up his autobiography by shamelessly promoting his own heroism and machismo. Cellini's description of how he performed "daring deeds" in the defense of Rome during the Spanish attack of 1527 is stirring, but, like all of his fantastic works, it is likely that this story is largely a product of Cellini's vivid imagination and creative discretion (Cellini, 66). The artist's narrative references to his unabashedly scandalous love affairs outstrip Pitti's modest avowals of courtly love and lend intrigue to a story otherwise scattered with anecdotes of temperamental rage and rash violence, the products of a hot temper befitting a man with a Renaissance ego. On the occasion of his brother's murder, Cellini's rage reached homicidal proportions as he set out to avenge his brother's honor by slaughtering his brother's assailant. ...read more.

When Pope Clement grew tired of waiting and sent his officials to collect the unfinished chalice and transfer it to another artist for completion, Cellini became deeply offended and agreed only to refund the value of the materials, adamantly refusing to part with his beloved creation. Despite threats of imprisonment and execution, the artist continued to resist the authorities proclaiming, "the work is mine, I shall do with it as I wish!" (Cellini, 104). Cellini's understanding of his work as physical and emotional extension of his artistic spirit underscores the artist's defining qualities of pride and egotism. In the model of Burckhardt's uomo universale, Cellini and Pitti were both individuals who sought the highest level of personal development, transcending national and cultural boundaries through the mastery and application of their talents. Although Burckhardt's definition of the Renaissance man suggests the achievement of perfection in life's various pursuits, is not necessarily the actual achievement of greatness, but the individual's desire to achieve greatness that defines the "all sided man." Notwithstanding their shortcomings and failures, Pitti and Cellini, in their own exceptional ways and to varying degrees, achieved incredible successes in their personal and professional lives. Even as such, their illustrious careers alone offer only incomplete testimony to their humanist tendencies and Renaissance spirits. Ultimately, Buonaccorso Pitti and Benvenuto Cellini distinguish themselves as Renaissance men through their remarkable individuality, their extraordinary level of ambition, and their unyielding work ethic. ?? ?? ?? ?? 1 ...read more.