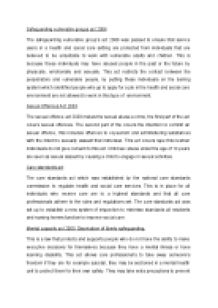 Transfer-Encoding: chunked ﻿Safeguarding vulnerable groups act 2006 The safeguarding vulnerable group?s act 2006 was passed to ensure that service users in a health and social care setting are protected from individuals that are believed to be unsuitable to work with vulnerable adults and children. This is because these individuals may have abused people in the past or the future by physically, emotionally and sexually. This act restricts the contact between the perpetrators and vulnerable people, by putting these individuals on the barring system which identified people who go to apply for a job in the health and social care environment are not allowed to work in this type of environment. Sexual Offences Act 2003 The sexual offence act 2003 makes the sexual abuse a crime, the first part of the act covers sexual offences. The second part of the covers the intention to commit an sexual offence, this includes offences to voyeurism and administering substances with the intent to sexually assault that individual. This act covers rape this is when individuals do not give consent to this act. Child sex abuse under the age of 13 years are seen as sexual assault by causing a child to engage in sexual activities. Care standards act The care standards act which was established by the national care standards commission to regulate health and social care services. This is in place for all individuals who receive care are to a highest standards and that all care professionals adhere to the rules and regulations set. The care standards act was set up to establish a new system of inspection to minimise standards all residents and nursing homes function to improve social care. Mental capacity act 2005: Deprivation of liberty safeguarding. This is a law that protects and supports people who do not have the ability to make executive decisions for themselves because they have a mental illness or have learning disability. ...read more.

All documents if written by hand have to be on black ball point pen and that there is no spelling or grammatical errors and that the information is clear to understand and to read. It is also important that records are factual and not the thoughts of yours as thoughts are not what actually happen. It is also important that all files on the pc?s are in password protected files and all paper files are filed correctly in a locked cabinets. Working in partnership with the adults using services will reduce the risk of abuse as staff members will be able to gain information of an individual if they suspect that they are being abused also they could have unexplained bruising which they can ask them about. Also the care staff may ask the adults they care for if they have seen an individual being abused or mishandles by the care staff in question and also see if they have been treat unequally by the perpetrator. They may have asked these induvial because they are in the care home environment with these individuals all day and will have more off a chance of witnessing the abuse happening to others. Family?s will be able to reduce the risk of an individual being abused by ensuring that they look at care homes in great detail so they ensure they have picked the correct environment for them to go into. Also they can look at the rating of the health care setting this is so that they get the best quality of care that an individual can have. Informal carers can also prevent abuse these can be individuals who are volunteering they may see that an resident has constant bruising or they may hear a care professional emotionally abusing an individual they can be shouting at them and stating they are useless and they shouldn?t be hear. ...read more.

This can cause individuals to have pressure soars, bruising and broken bones. The care professional will have to mark these down on a body map of the location of the injury and the correct size. For example a resident may have been neglected and this has been reported by a member of staff and the CQC agency has come to investigate what has happened and what this has caused to the individual they will look at the injury?s to them and mark this down on the body map so if the individual has a bruise on their ribs and is about 2cm long. They may also take a photo of the bruise so when building up a court case about the individual who has been neglected has proof of the bruises that they have sustained and where this was. It will reduce the risk of neglect as if they did not map down or take pictures of the burse?s they will disappear before the court case leaving no evidence that the staff member has been neglecting the individual. They may get there job back and allowed to work with vulnerable adults and can neglect others. An individual who expresses there concern about service users in a health and social care setting if they are being abused are known as whistle blowers. This is because they express their views of individual?s wrongdoing to managers or to the care quality commission (CQC), if you feel that individuals are in danger of abuse it is important that you tell someone. May people who have been a whistle blower may have been treated unfairly and fired from work for trying to prevent and reduce the risk of people being neglected and abused in a care setting. This will reduce the risk of neglect as the individual will reduce the risk of this abuse carrying on as the care quality commission will investigate this allegation and resolve the improper care that is being given. ...read more.