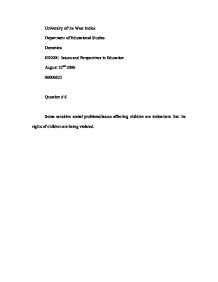 University of the West Indies Department of Educational Studies Dominica ED20X: Issues and Perspectives in Education August 22nd 2006 06006622 Question # 6 Some sensitive social problems/issues affecting children are indications that the rights of children are being violated. Table of Contents Introduction Literature Review Methodology Discussion of Findings/Implications Recommendation Appendix Bibliography Introduction In Western societies, children are recognized as potential citizens with rights and duties but deserving special protection because of their vulnerability. According to the New International Webster Dictionary, 'a child is a human being who is below the age of eighteen. This is further supported by the United Nations Conventions on the Right of the Child (UNCRC) which defines a child as 'a person under the age of eighteen unless national law recognizes the age of majority earlier. Children in many societies face a variety of problems which unfortunately may map the course that their future development may take. These social sensitive issues/problems include child abuse (sexual, physical, and emotional), homosexuality, racial discrimination and HIV/AIDS. These issues are called sensitive because they have the very undesirable effects on the individuals not to mention the fact that they rather be 'swept under the carpet' than be dealt with openly. These issues are not always easy to talk about and persons are hesitant to report, discuss or even deal with them because of the mixed feelings and reactions that they tend to effect. These social problems have provoked a succession of reforms that are the foundation of our present child protection services including Governmental Organizations such as the Welfare Department and Non-Governmental Organizations such as Christian Children Fund (CCF) and United Nations Children Fund (UNICEF). Although these child protection services exist, children continue to suffer at the hands of adults, including those who should have their best interest at heart. There are many instances in which the law attempts to deal with the dangers affecting children or the dangers to which they may be exposed to. ...read more.

HIV attacks the human body by breaking down its immune system that is meant to fight diseases. Over a period of time, the immune system weakens and the body loses its natural ability to fight diseases. At this stage, various diseases affect the infected person. HIV/AIDS is predominantly a sexual disease which affects mainly adults between the ages of 15-50 years. HIV/AIDS can be passed on through heterosexual transmission (man to woman/woman to man), homosexual transmission (man to man) and bisexual transmission (man to man and woman/woman to man and woman.) There are three main ways of contracting this disease: * Blood and body fluids such as semen, blood and breast milk * Blood transfusions * Vertical transmission that is from mother to unborn child The Joint United Nations Programme on HIV/AIDS (UNAIDS), estimates that, there are now 40 million people living with HIV/AIDS worldwide.. In the U.S., approximately one million people have HIV or AIDS, and 40,000 Americans become newly infected with HIV each year. According to the CDC, it is estimated that a quarter of all people with HIV in the U.S. do not know they are carrying the virus. (amFar AIDS research) Since the beginning of the epidemic, AIDS has killed more than 25 million people worldwide, including more than 500,000 Americans. AIDS has replaced malaria and tuberculosis as the world's deadliest infectious disease among adults and is the fourth leading cause of death worldwide. Fifteen million children have been orphaned by the epidemic. The Caribbean has a well-established HIV epidemic, making the region second most affected in the world. At the end of 2005, there were between 240,000 and 420,000 HIV-infected adults and children in the region. The region's HIV prevalence was estimated to be between 1.1% and 2.2%; among young people 15-24 years of age, HIV prevalence is approximately 1.6% for women and 0.7% for men. In 2005 alone, there were between 26,000 and 54,000 new HIV infections and between 19,000 to 36,000 AIDS-related deaths. ...read more.

Because of the issues being of a sensitive nature parents and students interviewed were reluctant to talk. However the parents and students stated that there should be a better response from authorities when abuse cases are reported. Both parents and students stated that they would not want to be in the same school system with people who are HIV/AIDS positive and that homosexuality should not be tolerated in any organization much less the school system. The interviewees stated that they are not aware of racism in schools although they alluded to the fact that some people are 'looked down' upon because of socio-economic status. Some Implications can be * Mechanism within the school system must be put in place to guide teachers as to the strategies that can be used to help students facing these dilemmas * Schools need to develop Action research plans to help teachers know their students and be better able to reach them. * Policy makers need to involve students, teacher, counselors and teacher when developing policies which may affect the education system Recommendations The findings of this research paper lend themselves to certain recommendations 1. Students should be taught about their rights and responsibilities. 2. Public education on the Rights of the child 3. Educators get versed on the UNCRC and Education Act of their country. 4. Counseling should be made a part of the Teacher Training Programmes. This will enable the teacher to better deal with the sensitive issues which they are confronted with daily. 5. Sex Education should be made a part of the curriculum at an early stage. If children get the proper education on sex they will be able to detect appropriate and inappropriate behaviours towards them 6. Morals and values should be made a part of the Social Studies Curriculum 7. A well structured Family Life Education programme should be ongoing at all schools. 8. Students should be taught to accept people regardless of who they are, what they believe and the life they live. 9. There is need for a Family Court which will help deal with legal issues faced by children. ...read more.