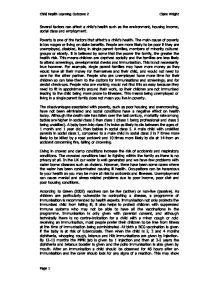 Several factors can affect a child's health such as the environment, housing income, social class and employment.

Several factors can affect a child's health such as the environment, housing income, social class and employment. Poverty is one of the factors that affect's a child's health. The main cause of poverty is low wages or living on state benefits. People are more likely to be poor if they are unemployed, disabled, living in single parent families, members of minority cultured groups or elderly. It is believed by some that the poorer the family, the greater the health risk. This means children are deprived socially and the families are less likely to attend screenings, developmental checks and immunisation. This is not necessarily true however. For example, single parent families may have more money as they would have all their money for themselves and their child, and would not need to care for the other partner. People who are unemployed have more time for their children so can take them to the doctors for immunisations and screenings, and for dental check-ups. People who are working would not find this as easy because they need to fit in appointments around their work, so their children are not immunised leading to the child being more prone to illnesses. This means being unemployed or living in a single parent family does not mean you live in poverty. The disadvantages associated with poverty, such as poor housing and overcrowding, have not been eliminated and social conditions have a negative effect on health today. Although the death rate has fallen over the last century, mortality rate among babies are higher in social class 5 than class 1 (class 1 being professional and class 5 being unskilled). ...read more.

The major cause, in the context that we are referring to, is infection, but there are various other rarer causes which occasionally occur. Appendicitis is inflammation of the appendix, a small pouch attached to the cecum, the beginning of the colon, on the lower right side of the abdomen. If untreated, an inflamed appendix can burst, causing infection and even death. The cause of appendicitis is usually unknown. It may occur after a viral infection in the digestive tract or when the open connecting the large intestine and appendix is blocked. The inflammation can cause infection, a blood clot, or rupture of the appendix. Because of the risk of rupture, appendicitis is considered an emergency. Threadworm or pinworm (Enterobius vermicularis) is a small, white, thread-like worm between 2.5 and 12mm long. Female threadworms produce large numbers of tiny eggs, which are invisible to the naked eye. The female lays these eggs outside the anus, usually in warm conditions, such as when the host is asleep; inactivity promotes movement of the female to the anus. The female secretes mucus, which causes intense itching and promotes scratching by the host. Re-infection occurs when eggs are ingested either from contaminated hands or food. Diabetes mellitus is an endocrine disorder in which the pancreas does not make enough insulin. Insulin helps the body to use and store sugar. When it is not used efficiently the sugar overflows into the urine. It is often triggered following a severe viral infection and is not an inherited condition, but there is familial trait to diabetes. ...read more.

The Sure Start Scheme, were central government has allocated �1.4 billion throughout the Department of Health, Education and Social Security to target 500 'high need' deprived areas and improve local community services for families and young children. I have experienced the Sure Start Scheme myself and think it is a good scheme which should be developed more throughout the country. Yeo (2002) states that the Sure Start Initiative is a policy which is specifically aimed at 'multiple problem' families, these may include poor health, deprived living conditions low education attainment, unemployment, social problems such as, alcohol, physical or drug abuse or lack of local amenities. Even though I think this is a good scheme, I think it should be open to everyone for them to interact and develop the social skills no matter what class or background they come from. The Sure Start Scheme is mainly funded by central government and expects local authorities to work in 'partnership' with the statutory services such as health, education, and social services departments and local 'private' businesses, charities (Kidscape, The Children's Fund and the NSPCC are examples) and training organisations who make up the 'mixed economy' of service provision and contribute as service providers. These agencies 'work together' to provide a range of local services some of which include family support, childcare facilities, training courses for adults to enable them to return to work, help and advice on parenting (parenting plus course), adult Literacy and Numeracy classes, computer courses, and a range of 'other' courses to improve awareness and skills in a range of different areas. I think all these services help provide the adult and their children with a better and brighter future. ...read more.