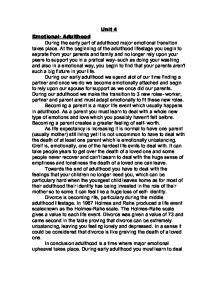 Unit 4 Emotional- Adulthood During the early part of adulthood major emotional transition takes place. At the beginning of the adulthood lifestage you begin to seprate from your parents and family and no longer rely upon your peers to support you in a pratical way- such as doing your washing and also in a emotional way, you begin to find that your parents aren't such a big fixture in your life. During our early adulthood we spend alot of our time finding a partner and once we do we become emotionally attached and begin to rely upon our spouse for support as we once did our parents. During our adulthood we make the transition to 3 new roles- worker, partner and parent and must adapt emotionally to fit these new roles. Becoming a parent is a major life event which usually happens in adulthood. As a parent you must learn to deal with a whole new type of emotions and love which you possibly haven't felt before. Becoming a parent creates a greater feeling of self- worth. As life expectancy is increasing it is normal to have one parent (usually mother) ...read more.

The three types of roles (partner, parent and worker), which were sustained during early adulthood continue to be important but have usually changed. If a divorce has taken place it will be likely that it effects the social calender. Friends which were shared by the couple are likely to feel their loyalties are split which could result in a loss of friends. However, on the other hand, a divorce can result in what could be considered as ' new found freedom'. If a marriage hasn't resulted in divorce, after the children have left home, the relationship with your spouse will be given more significance. You will have chance to take up a hobby. However, during this life stage you may find your self with the responsibility of caring for a elderly relative which can be very time consuming. Emotional- Later Adulthood Later adulthood is a lifestage where considerable changes take place as many long time roles are shed. Retirement is a key event which takes place during later adulthood and, emotionally, can be a difficult time. It may feel as though their identies are being lost. ...read more.

However a great majority of people retire with a state pension and find they quite often don't have enough many to live comfortabley and this is a major factor which can effect how someones retirement is spent. When retired it can be a great chance for people to spend their remaining time with the person that they love. however if they have out-lived their spouse retirement can be a very lonely time with few chances to communicate with other people, particulary if they are still in mourning which is quite common. If they suffer from a disability it will likely effect their social life. It can often leave a person house-bound which will greatly effect their enjoyment of later adulthood. In conclusion, a persons enjoyment of life during later adulthood greatly depends on a variety things which leaves me doubtless in thinking that will effect a persons social life. Some people find as they get older their social becomes non- existent and it can also appear that they are simplt waiting to die. However, for some people, under the right circumstances their social life has never looked as healthy and their best part of their life was during retirement. By Kirsty Metcalfe, Tracy Bolton and Natalie Meeson. ...read more.