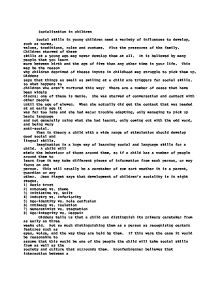 Socialisation in children Social skills in young children need a variety of influences to develop, such as norms, values, traditions, roles and customs. Plus the pressures of the family. Children starved of these skills at a young age may never develop them at all. It is believed by many people that you learn more between birth and the age of five than any other time in your life. This may be the reason why children deprived of theses inputs in childhood may struggle to pick them up. Giddens says that things as small as smiling at a child are triggers for social skills. So what happens to children who aren't nurtured this way? There are a number of cases that have been widely discus; one of these is Genie. She was starved of conversation and contact with other people until the age of eleven. ...read more.

Industry vs. Inferiority 5) Ego-identity vs. Role confusion 6) Intimacy vs. Isolation 7) Generativist vs. Stagnation 8) Ego-integrity vs. Despair Giddens tells us that a child can distinguish its primary caretaker from as early as three weeks old. Not so much distinguishing them as a person as recognising certain features such as eyes, voice, and the way they are held by them. If this were the case it would be reasonable to assume that this would be one of the people the child will take social skills from as well as the society and culture that surrounds them. Bronfenbrenner believes that interaction between a child and its family are he main focuses of human development, this assumes that the function of children and families can be strengthened by the quality and quantity of relationships. Relationships with family, friends, and people in the community. ...read more.

Sociobiology states that genetics is the sole factor responsible for the behaviour in humans and animals. There are three types of sociobiology. Broad sociobiology deals with general behavioural tendencies present in animals and humans. Narrow sociobiology is based on the evolutionary theory and focuses on the genetic aspects of behaviour in most animals and humans. Narrow sociobiology adamantly rejects the notion that culture can affect behaviour. Pop sociobiology uses the argument of Narrow sociobiology, and relates the evolutionary theory to human nature. Most sociologists reject the arguments of sociobiology using arguments and examples like Genie and the Wild boy of Averyon to back them up. They had no contact and turned out primitive and unsociable, with no social skills. If it was a basic animal instinct to be sociable then surely they would have done so as soon as they had the chance to. This could be argued by sociologists to prove the theories of the sociobiologists wrong. Graeme Stewart Graeme Stewart Sociology 09.09.2002 ...read more.