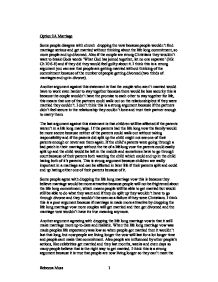 Some people agree with dropping the life long marriage vow this is because they believe marriage would be more attractive because people will not be frightened about the life long commitment.

Option 2A Marriage Some people disagree with church dropping the vow because people wouldn't find marriage serious and get married without thinking about the life long commitment, so more people end up divorced. Also if the couple are strong Christians they wouldn't want to break Gods words 'What God has joined together, let no one separate' (Mk Ch 10 6-8) and if they did they would feel guilty about it. I think this is a strong argument you can see that people are getting married without thinking of the commitment because of the number of people getting divorced (two thirds of marriages end up in divorce). Another argument against this statement is that the couple who aren't married would have to work even harder to stay together because there would be less security this is because the couple wouldn't have the promise to each other to stay together for life, this means that one of the partners could walk out on the relationship but if they were married they couldn't. ...read more.

This is strong argument because children are really important in a marriage and can be affected in later life if their parents split and could end up hating either one of their parents because of it. Some people agree with dropping the life long marriage vow this is because they believe marriage would be more attractive because people will not be frightened about the life long commitment, which means people will be able to get married but would still be able to do what they want and if they do split up they wouldn't have to go through divorce and they wouldn't be seen as a failure if they were Christians. I think this is a poor argument because if marriage is made more attractive by dropping the life long marriage vow more couples will get married and then get divorced and the marriage vow wouldn't have its true meaning anymore. ...read more.

If the child's parents did split up the child could still have both parents if the child's parent met a new partner and it would feel secure because it would have both parents even thought the new parent was it's real parent. But the child could be hurt by this situation because the new parent could be abusive and even turn the real parent against the child so the child would have no one to look after them. I think this is a poor argument because I think children are more stable if their parents are in a life long marriage because neither of the parents could walk out on the on the family. My opinion is that the lifelong marriage vow shouldn't be kept because even though we have the vow no-one is following it which is shown by how many more people are getting divorced and having affairs and without it people will feel more free and if they did end up getting divorced it wouldn't be seen as wrong in the Catholic Church's eyes so they wouldn't feel guilty. Rebecca Moss 1 ...read more.