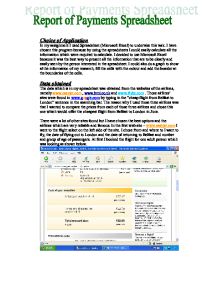 Choice of Application In my assignment I used Spreadsheet (Microsoft Excel) to undertake this task. I have chosen this program because by using the spreadsheets I could easily calculate all the information which were required to calculate. I decided to use Microsoft Excel because it was the best way to present all the information that are to be clearly and easily seen by the person interested in the spreadsheet. I could also do a graph to show al the information of my research, fill the cells with the colour and add the boarder at the boundaries of the cells. Data obtained The data which is in my spreadsheet was obtained from the websites of the airlines, namely www.easyjet.com , www.bmi.co.uk and www.flybe.com . Those airlines' sites were found in www.google.com by typing in the "cheap flight from Belfast to London" sentence in the searching bar. The reason why I used those three airlines was that I wanted to compare the prices from each of those three airlines and chose this one which would offer the cheapest flight from Belfast to London in June. ...read more.

At this stage I have chosen a child in group of age selection. The ticket after booking was looking as shown below. The price of this ticket is �26.99 but it only includes taxes and charges per child. I didn't need any insurance for this ticket because I wanted to make the price as low as it was possible. That was all thing that I have been doing on this website. Another website that I visited to book the tickets for an adult and child was a www.bmi.co.uk site. Almost every site looks very similar. The booking bar was on left hand side of the website as in easy jet site. The steps of booking are also the same so I have chosen the departure and returning back place and dates of flights, the age of passenger and pressed "Submit" which was meant "Search". The booked ticket was looking as shown below. Then I have done the same thing with the child i.e. I have chosen all the same thing apart from the group of age, as I needed the price for a ticket for one child. ...read more.

Firstly I made a table that shows all the prices that has been given by each pupil per month. The maximum price that could be given by pupil in one month was �100. I had to make a validation in range in each month which would not allow teacher to get more than �100 per months. To make this I clicked Data --> Validation... and chose the option Decimal. I also chose less than and the maximum 100 as it was maximum price that could be paid in one month. Then if I put more than �100 the alert message appears. It looks like shown below: Solution obtained Airline easy Jet BMI FlyBe Price for one pupil �32.99 �67.95 �48.58 I would recommend the easy Jet airline to go with to the London from Belfast as the costs of the flight are cheapest of all the three airlines that I have been trying to buy ticket. FARE TAX TOTAL FARE TAX TOTAL FARE TAX TOTAL From those graphs I can see that the cheapest airline from those three is easy Jet. Despite easy Jet hasn't the cheapest fare for the ticket, when we add tax this will be the cheapest ticket. ...read more.