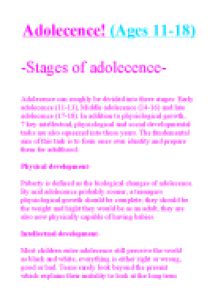 ﻿Adolecence! (Ages 11-18) -Stages of adolecence- Adolecence can roughly be divided into three stages: Early adolecence (11-13), Middle adolecence (14-16) and late adolecence (17-18). In addition to physiological growth, 7 key intellectual, physiological and social developmental tasks are also squeezed into these years. The fundemental aim of this task is to form ones own identity and prepare them for adulthood. Physical development- Puberty is defined as the biological changes of adolecence. By mid adolecence probably sooner, a teenagers physiological growth should be complete; they should be the weight and hight they would be as an adult, they are also now physically capable of having babies. Intellectual development- Most children enter adolecence still perceive the world as black and white, everything is either right or wrong, good or bad. Teens rarely look beyond the present which explains their inability to look at the long term consequences of their actions. ...read more.

Adolecence has the effect of a stone being dropped in water, their social circle ripples outwards to include friends of the same sex, opposite sex, different ethnic and social groups and different adults like a favorite teacher or coach. Not all teenagers go through adolecence at the same time or display the same behaviour. Whats more, all though adolecence, a youngster can be futher along in some areas of development than others. For example a 15 year old boy might physically resemble a young man but he may still act like a child as it is not until later on in adolecence that Intellectual, Emotional and social development start to catch up with physical development. Is it any surprise that teenagers sometimes feel confused and conflicted, espcially when you think of the limbo society imposes on them up until they are about 20+. ...read more.

Or that daughter who tells you to stop treating her like a baby acts wounded when you ask her to clear the table after dinner? But beyond learning to live with the swiching currents of adolecent emotion, parents may be battling some conflicting emotions themselves. The pride of watching your teenager grow and become independent may be countered by the feeling of displacement. As much as you might accept intellectually that withdrawing from one's parents is an integral part of growing up, it hurts to see that child that used to beg to join you on your daily errands, now rarely agrees to be seen in public with you and even then only if the destination is at least one area code away. It is comforting to know that feeling a sense of loss is a normal response- one that is most probably shared with most of the parents stood next to you at football practice. For pediatricians, offering guidence and support to parents makes up a considerable and rewarding part of each day. ...read more.

As the unit information for this work is not available, I will make general comments as to how to the work could be improved. Firstly, please check spelling and grammar carefully as there are several errors that affect the readability of the work. Secondly, the writer talks a lot about things a young person goes through ?in adolescence?, but this should be linked to the specific stages mentioned on page 1. Lastly, consider whether any link to child development theorists such as Piaget can be made.
3/5