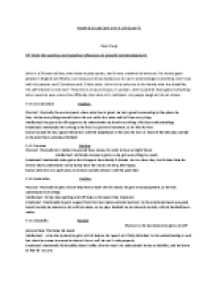 State the positive and negative influences on growth and development of John, a boy with autism.

﻿Health & Social Care Unit 8: Life Span P2 Case Study P2: State the positive and negative influences on growth and development. John is a 14 year old boy, who loves to play sports, and is very creative he loves art. He needs good grades in English and Maths, but because he has dyslexia so he can?t acknowledge everything. John lives with his parents and 2 brothers and 1 little sister. John is the only one in the family who has disability. His self-esteem is very low! They live in a luxury house, in London. John?s parents have gave everything John needs to over-come this difficulty. But John isn?t confident. As people laugh at him at school. P.I.E.S environment Positive- Physical: Physically the environment where John lives is good. ...read more.

Social: John lives in a posh area, so he does socially interact with the posh kids. P.I.E.S education Positive Physical: Physically he gets a lot of help from school with his needs; he gets extra equipment, so he fully understands everything. Intellectual: He has been getting a lot off help, so his speech has improved. Emotional: Emotionally he gets support from his class mates and also teachers. So his emotional needs are good. Social: Socially he interacts a lot with his mates, as he plays football. So he interacts socially with his football team mates. P.I.E.S disability Positive Physical: As he has dyslexia he gets a lot off physical help. This helps his needs. Intellectual: As he has dyslexia he gets a lot of help so his speech isn?t fully disturbed. ...read more.

Income. P.I.E.S Negative Physical: His parents give him everything, so in the future he won?t be able to stand on his own feet an work for himself. Intellectual: He does live in a posh area, but this affects him because he relys on others, he gets everything he wants. He?s spoilt. Emotional: Social: education P.I.E.S Negative Physical: He relys to much on teachers, this is bad as he won?t use his own knowledge. Intellectual: His education is good, but he gets a lot off support so he doesn?t do well in exams. Emotional: Emotionally he gets hurt, as he can?t understand certain basics as quickly as other kids can. Social: People call him dumb, pathetic because he doesn?t understand what others say. His communication skills aren?t so good. Disability P.I.E.S Negative Physical: He gets help a lot from his care centre, where he visits for checkups, but physically he?s not doing stuff for himself. Intellectual: Emotional: Social: . ...read more.