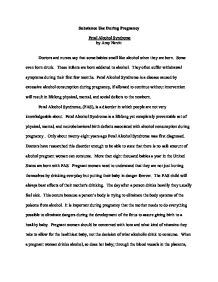 Substance Use During Pregnancy

Substance Use During Pregnancy Fetal Alcohol Syndrome by Amy Nevitt Doctors and nurses say that some babies smell like alcohol when they are born. Some even born drunk. These infants are born addicted to alcohol. They often suffer withdrawal symptoms during their first few months. Fetal Alcohol Syndrome is a disease caused by excessive alcohol consumption during pregnancy, if allowed to continue without intervention will result in lifelong physical, mental, and social defects to the newborn. Fetal Alcohol Syndrome, (FAS), is a disorder in which people are not very knowledgeable about. Fetal Alcohol Syndrome is a lifelong yet completely preventable set of physical, mental, and neurobehavioral birth defects associated with alcohol consumption during pregnancy . Only about twenty-eight years ago Fetal Alcohol Syndrome was first diagnosed. Doctors have researched this disorder enough to be able to state that there is no safe amount of alcohol pregnant women can consume. More than eight thousand babies a year in the United States are born with FAS. Pregnant women need to understand that they are not just hurting themselves by drinking everyday but putting their baby in danger forever. The FAS child will always bear effects of their mother's drinking. The day after a person drinks heavily they usually feel sick. This occurs because a person's body is trying to eliminate the body systems of the poisons from alcohol. It is important during pregnancy that the mother needs to do everything possible to eliminate dangers during the development of the fetus to assure giving birth to a healthy baby. ...read more.

Problems with sex organs cause an increase in chemical imbalances in the child's body. Chemical imbalances lead to a variety of social interaction problems. As the Fetal Alcohol Syndrome child goes to school the child has a difficult time maintaining the level with other students of the same age. The FAS child struggles to learn which is a direct result of the memory that was affected tremendously due to brain damage as a fetus. A primary stress in a child's life is peer pressure. A child going to school and being diagnosed with Fetal Alcohol Syndrome will have not only experience the normal adolescence conflicts but will have magnified social problems due to chemical imbalances. Fetal Alcohol Syndrome causes the child to suffer physically more than the mother. Both the mother and child have to deal with the mental effects while dealing with the problems she has caused. As a child enters grade school the Fetal Alcohol Syndrome defects become more of an inconvenience to the child and people around them. The child is friendlier with FAS and very outgoing. A child in grade school does not normally talk to strangers without being scared. FAS children do not become nervous and may not think twice to do exactly what a stranger may request of them. The child does not think about the consequences of their actions. A child with Fetal Alcohol Syndrome does not understand rules very well and tend to be hyperactive. A child that is hyperactive tends to affect other students as well. ...read more.

This stage is the hardest for most patients to be successful. The patient has to shun the people around alcohol or be strong enough not drink the alcohol. Most patients have no problems during this process of rehabilitation until the maintenance stage. Termination is the last stage. This stage is when the patient is confident they will never relapse. In most studies people do not reach this stage. Patients that choose to take each step one-by-one will be successful. They have to set short term and long term goals to keep their minds in focus. A pregnant woman chooses a positive role in taking care of herself and the baby by not drinking, or the pregnant woman can cause the baby to be diagnosed with Fetal Alcohol Syndrome by consuming extreme amounts of alcohol. Fetal Alcohol Syndrome causes the fetus, infant, and grown child to go through abnormal changes, which healthy people do not have to struggle with throughout life. The Fetal Alcohol Syndrome child is affected mentally, physically, and socially. Nothing can treat FAS; the child, mother, and the rest of the family are affected beginning the moment the mother takes her first drink of alcohol throughout the rest of the child's life. A variety of programs and options are available to aid an alcoholic pregnant woman who seeks to overcome alcoholism. In the end, the only key to success is the desire of the individual to face alcoholism and make lifestyle changes. If a woman is not stable enough to be able to control her own drinking there is no reason for the woman to take on the wonderful but challenging responsibility of taking care of a child. ?? ?? ?? ?? ...read more.