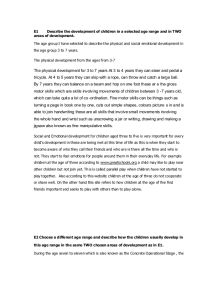 The age group I have selected to describe the physical and social emotional development in the age group 3 to 7 years.

at this time of life as this is when they start to become aware of who they call their friends and who are is there all the time and who is not. They start to feel emotions for people around them in their everyday life. For example children at the age of three according to www.greatschools.org a child may like to play near other children but not join yet. This is called parallel play when children have not started to play together. Also according to this website children at the age of three do not cooperate or share well. On the other hand this site refers to how children at the age of five find friends important and seeks to play with others than to play alone. ...read more.

Piaget claims that before the beginning of this stage, children\'s ideas about different objects, are formed and dominated by the appearance of the object. For example, there appears to be more blocks when they are spread out, than when they are in a small pile. Children aged seven to eleven displays a wider variety of self-regulation skills. They show this through understanding and enacting cultural display rules has increased dramatically by this stage, such that by now children begin to know when to control emotional expressivity as well as have a sufficient repertoire of behavioral regulation skills allowing them to effectively mask emotions in socially appropriate ways. According to www.psychology.jrank.org research has indicated that children at this age have become sensitive to the social contextual cues which serve to guide their decisions to express or control negative emotions. ...read more.

A good essay that has scope for development. The first half covers areas of development and shows some research.

However the second half does not continue the thread and so does not meet the brief of the title. It could be enhanced by a little more research and a bit of planning before writing.

It provides a good starting point on which to build a good essay from.