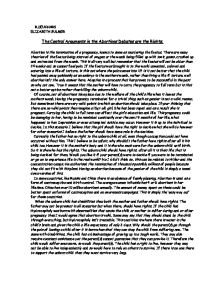 The Central Arguments in the Abortions Debates are the Rights.

R.DEUCHARS ELIZABETH BULMER The Central Arguments in the Abortions Debates are the Rights. Abortion is the termination of a pregnancy, known to some as murdering the foetus. There are many theories of the foetus being starved of oxygen or the womb being filled up with toxic gases, crushed up and extracted from the womb. This is all very well but remember that the foetus will not be older than 24 weeks and so cannot feel pain. If the foetus was brought in to the world unwanted, unloved and entering into a life of torture, is this not where the pain comes into it? is it not better that the child had passed away painlessly as an embryo in the mothers womb, rather than living a life if torture. well abortion isn't the only answer here. Adoption is a process that has proven to be successful in the past so why not now. True it means that the mother will have to carry the pregnancy to full term but is that not a better option rather than killing the unborn child. ...read more.

He authorised the termination of thousands possibly millions of people because they did not fit with his plans. Having an abortion because of the gender of the child is simply a toned down version of this. In some countries, like Russia and China there is an absence of family planning. Abortion is used as a form of contraception and birth control. The average woman in Russia has 4 or 5 abortions in her lifetime. China has over 10 million abortions annually. The amount of money spent on these could be better spent on forms of contraception and on awareness campaigns. This is simply the 'easy way out' for these countries. When the unborn child has disabilities then both the mother and father should have rights. The father may not be present in all scenarios but when there, should have rights. If the child had Hydrocephaly was born with abnormalities that cause the child or mother to suffer during and or after pregnancy then I would agree that abortion is valid. Some may say that they should stand by the child through everything, but Hydrocephaly isn't treatable. ...read more.

The mother may not want the child but the father may, and so we come to a standstill in who has the most right. The mother or the father. It is the woman's body and so the woman should decide, however the child also belongs to the father so a mutual agreement should be attempted. The mother may be willing to carry the unborn child to full term and after that the father could look after the child, yet it is asking a lot of the woman. In the UK abortion was made legal in 1967 under certain circumstances. The problem we have nowadays is where do we draw the line. Also the right for men to have a say in the future of what could be one of his children. I do agree that ultimately the woman decides but not to ignore the wishes of the father, (if he is willing to help in the upbringing of the child in question) Those with strong moral and religious objections to abortion argue that the rights of the unborn child override the rights of the mother. This may not always work, as in some situations the abortion is vital to the mother's survival. ...read more.