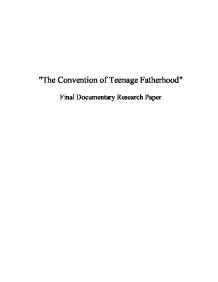 The Convention of Teenage Fatherhood

Steve holds Sara on his shoulders much like a symbolic burden. Parenting is a huge responsibility that many teenage fathers are taking on. When planning for children the first thing on the list is normally financial stability. Without this, the costs of raising a child become reality. Steve shares," As a teen, being a father means you have to grow up and you have to do it fast." Being able to balance school and work is hard for fathers and many often find it easier to drop out (Lindsay 01). For the teenage fathers who do not run away through all the struggles, support should be given. Government/Community Support Support programs for teenage fathers are uncommon or under advertised and this forces fathers to have to look harder or give up. When asked what programs were available to him Steve responded, "Fresh out of the hospital you're just told about stuff about the moms and babies but men have to look at the libraries for support or help, stuff like that." In another picture on my right, Steve is holding Sara as she takes her first few steps. ...read more.

The long held stereotypes of teenage fathers being "dead beat dads" are influenced greatly by the government and communities' lack of support and care. Steve's interview only reinforces the idea that although many teenage fathers are accepting their parenting responsibilities, the Canadian public has yet to show them support and respect. "[Teenage Fatherhood] means you have a lot more responsibilities then just going to work or school everyday I mean you gotta care for someone you have to care for another life other then your own. There are a lot of kids out there who wouldn't know how to deal with it, I didn't know how to deal with it but you just gotta adapt and I've grown up a lot more in the past year then ever." As Canadians, they are part of society and therefore it is society's responsibility to help teenage fathers and lift the stereotypes through support and education. By educating not only the fathers but also the public, the attitudes towards teenage fathers stand a better chance of changing for the good. As Wilhelm Bulsch famously said, "Becoming a father isn't difficult, but it's very difficult to be a father. ...read more.