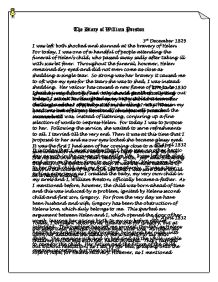 The diary of William Preston.

The Diary of William Preston 3rd December 1829 I was left both shocked and stunned at the bravery of Helen. For today, I was one of a handful of people attending the funeral of Helen's child, who passed away sadly after taking ill with scarlet fever. Throughout the funeral, however, Helen remained dry-eyed and did not even come as close as shedding a single tear. So strong was her bravery it caused me to oft wipe my eyes for the tears she was to shed, I was instead shedding. Her valour has caused a new flame of love to be ignited in my heart for her. Why should death cruelly and brutally snatch her daughter away? Why should it leave her the single mother of a baby still in her womb? Why? These questions leave me perplexed and consequently remain unanswered. 17th June 1830 I had my mind firmly fixed on aim and goal before setting out today. I set out to church today in impeccable manner of clothing and as I stepped out of my dwelling, not a hair in my head was out of place. ...read more.

This problem has left me sorriest, though, as Helens health has drastically deteriorated, bringing her nigh unto death. She remains sick and in bed and all the while unable to care for the child. Her future and the future of the child remain uncertain, but time will tell. 13th April 1832 Today, I wrought victory over Helens love for Gregory, but at the same time, suffered complete and utter loss. As Helen lay upon her deathbed she asked of me a favour; to lay both children on the bed with her, hand in hand. This I carried out without hesitation, as I sat by her bed, grasping onto the rope of hope, for Helens recovery. However, as I mentioned earlier, I was victorious in obtaining Helens love for a while. As death began emptying out the elixir of life from within Helens soul, she smiled a long, beautiful smile. A smile that I will never forget. The first and last smile I received from those pale, frail lips. And within an hour, her body lay still, lifeless and motionless on the bed. ...read more.

I could not find any. But lo and behold after a long stare at her, I realized my son's pocket-handkerchief, given to him by Fanny was tied around his neck. Then the last piece of the puzzle was put into place. I stirred into action, gathering blankets and brandy and in a quarter of an hour we were off, under the leadership of Lassie. 13th January 1848 "God, forgive my hardness of heart toward this fatherless child". Gregory lies dead. His love so strong has compelled me to beg for forgiveness. For I have treated him so badly, abused him and his dog and rendered him stupid in my eyes. But the love he showed toward his half brother the in the recent past was the greatest act of love and kindness witnessed before my eyes. As the snow showered down in the fells upon my son yesterday, Gregory bravely stripped himself of his shepherd's coat to make my son warm and placed his life before his brothers', consequently losing his life. I am guilt ridden that I have treated him like this all this time. God Forgive me for my heart of stone. ...read more.