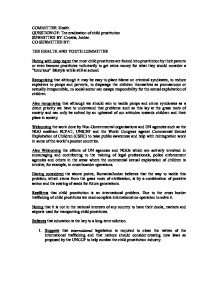 The eradication of child prostitution.

COMMITTEE: Health QUESTION OF: The eradication of child prostitution SUBMITTED BY: Croatia, Jordan CO-SUBMITTED BY: THE HEALTH AND YOUTH COMMITTEE Noting with deep regret that most child prostitutes are forced into prostitution by their parents or even become prostitutes voluntarily to get extra money for what they would consider a "luxurious" lifestyle while still at school. Recognising that although it may be easy to place blame on criminal syndicates, to reduce exploiters to pimps and perverts, to disparage the children themselves as promiscuous or sexually irresponsible, no social sector can escape responsibility for the sexual exploitation of children. Also recognising that although we should aim to tackle pimps and crime syndicates as a direct priority we have to understand that problems such as this lay at the grass roots of society and can only be solved by an upheaval of our attitudes towards children and their place in society. ...read more.

Noting that it is not in the national interests of any country to have their docks, markets and airports used for transporting child prostitutes. Believes that education is the key to a long-term solution. 1. Suggests that international legislation is required to close the valves of the international trafficking and that nations should consider creating new laws as proposed by the UNCCP to help combat the child prostitution industry. 2. Encourages individual nations to allocate resources to crack down on internal child prostitution by means of law enforcement and rigorous policing, and will provide resources where appropriate as decided by the UNCCP. 3. Further encourages nations to give tougher sentences to pimps and traffickers 4. Further Believes that as many children are driven into prostitution by poverty or hopelessness and therefore another long lasting solution to the issues in hand would be to have the UNCCP advise individual nations on how to ...read more.

Remain actively seized on the matter 6. Suggests that an education program organized by the UNCCP for all consenting member states to educate their people of issues behind child prostitution and to help to sensitise global public opinion against this problem. 7. Also proposes to set up a contraception distribution agency through the UNCCP to distribute contraception in areas suggested by the UNCCP's reports, and to distribute contraception through the education program. 8. Supports the setting up of rehabilitation centres, organised primarily by the UNCCP with the consent of the relevant authorities for the victims of child prostitution. 9. Suggests that the UNCCP initiates an action group which will find alternative employment for child prostitutes where necessary, or extra welfare for families on the condition that the child doesn't revert to prostitution. 10. Requests that in all consenting member states legislation is adapted to treat child prostitutes as victims and will face no official criminal charges themselves but that they are sent instead to the rehabilitation centres mentioned in clause 8. ...read more.