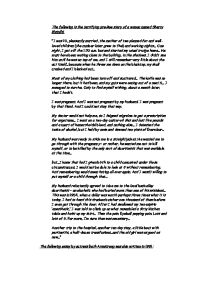 The following is the terrifying pre-Roe story of a woman named Sherry Matulis: "I was 23, pleasantly married, the mother of two planned-for and well-loved children (the number later grew to five) and working nights... One night, I got off the 1:20 a.m. bus and started my usual trudge home... He must have been waiting close to the building, in the shadows. I didn't see him until he was on top of me, and I still remember very little about the act itself...because when he threw me down on the blacktop, my skull cracked and I blacked out... Most of my clothing had been torn off and scattered... The knife was no longer there, but it had been, and my guts were oozing out of a neat X... I managed to survive. Only to find myself wishing, about a month later, that I hadn't. I was pregnant. And I was not pregnant by my husband. ...read more.

This was in 1954, when a dollar was worth perhaps three times what it is today. I had to hand this drunken butcher one thousand of them before I even got through the door. After I had swallowed my two-aspirin 'anesthetic,' I was told to climb up on what resembled a dirty kitchen table and hoist up my skirt... Then the pain. Eyeball popping pain. Lots and lots of it. Far more, I'm sure than was necessary... Another trip to the hospital, another ten-day stay, a little bout with peritonitis, a half-dozen transfusions...and the old girl was as good as new..." The following essay by actress Beth Armstrong was also written in 1991: "In July of 1986 my daughter, Lucy, was born with an underdeveloped brain. She was a beautiful little girl - at least to me and my husband - but her disabilities were severe. By the time she was two weeks old we knew that she would never walk, talk, feed herself, or even understand the concept of mother and father. ...read more.

The irony is that if so terrible a decision comes for me, I honestly can't say what choice I will make. But I do know that no one else should have the right to make it for me." Late abortions (after 22 weeks' gestation) constitute less than 1 percent of all abortions the average parent spends over $33,000 a year on a child The fetus is definitely a part of the mother's body. Without the mother's body the fetus cannot survive. Therefore (and I'm probably going to be chewed out for saying this but oh well) it has no rights or voice. It is no different than a mole or a cancer or any other growth on the woman's body. A person can go to the doctor and have a mole cut off and not get chewed out. Why then, if she goes to get a different type of growth cut out that may be equally unwanted, is she put down and hated? Let her do what is best for her. ...read more.