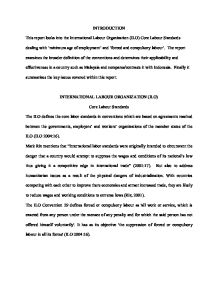 INTRODUCTION This report looks into the International Labour Organization (ILO) Core Labour Standards dealing with 'minimum age of employment' and 'forced and compulsory labour'. The report examines the broader definition of the conventions and determines their applicability and effectiveness in a country such as Malaysia and compares/contrasts it with Indonesia. Finally it summarizes the key issues covered within this report. INTERNATIONAL LABOUR ORGANIZATION (ILO) Core Labour Standards The ILO defines the core labor standards in conventions which are based on agreements reached between the governments, employers' and workers' organizations of the member states of the ILO (ILO 2004:16). Mark Rix mentions that "International labor standards were originally intended to circumvent the danger that a country would attempt to suppress the wages and conditions of its national's low thus giving it a competitive edge in international trade" (2001:17). But also to address humanitarian issues as a result of the physical dangers of industrialization. With countries competing with each other to improve there economies and attract increased trade, they are likely to reduce wages and working conditions to extreme lows (Rix, 2001). The ILO Convention 29 defines forced or compulsory labour as 'all work or service, which is exacted from any person under the menace of any penalty and for which the said person has not offered himself voluntarily'. ...read more.

The Asian financial crisis of 1997-1998 had an averse affect on the south-Asian countries including Malaysia. Yun reports "About I % of the workforce have been retrenched in 1998 (83,865 workers compared to 18,863 in 1997). Apart from retrenchment, wage reduction was also practiced with some firms cutting as much as 50% of wages to avert massive layoffs besides defaulting from paying their share to the EPF" (2002: 313). Increased migration is occurring at a time of general increase in activism in Malaysia and regionally. It is estimated that approx. 75% of migrants come from Indonesia, with the balance coming from Bangladesh, the Philippines, Pakistan and Thailand (Gurowitz: 2000). Malaysia needs migrant workers but does not want them and therefore they then to look the other way. These migrant workers are essential in providing the labour resources for sub-contractors. The majority of the contractors deny their domestic and foreign contract workers most, if not all, of the benefits provided for under Malaysian labour laws. Malaysia, in the interest of obtaining foreign investments from Multinational corporations (MNCs) has created 'Export Processing Zones', employing females and suppressing unions. Abott defines Export Processing Zones as, "a relatively small, geographically spread area within a country, the purpose of which is to attract export-orientated industries, by offering them especially favourable investment and trade conditions as compared with the remainder of the host country" (Abott, 1997). ...read more.

The governments of these countries should present incentives to the various sub-contractors, who are ultimately the ones who employ these child labourers, to assist in controlling child labor. Labour relations in developing countries can be directly influenced by the need for foreign investment. These foreign companies use developing countries as a pool of cheap labour through sub-contracting. It is convenient to these companies that there are sometimes authoritarian governments who restrict the development of unions. 'Free Zones' and the 'feminization' of labour ensure a compliant workforce within the state borders along with high levels of migrant labor. In fact, Wolfgang claims that " Once the vast majority of those participating in the world economy has renounced violation of core labour standards for support of their own national economy, factual global compliance is only a question of time. Then there will be increasing economic pressure backed by moral reasoning, compelling any states that might still be non-compliant in order to support their own national economy to change their views. Non-compliance would then no longer give significant comparative cost advantages. On the contrary, keeping to this kind of trading strategy would risk economic isolation (2002: 888-889). Ultimately, if one is to take a step backward... the real issue is the distribution of wealth. ...read more.