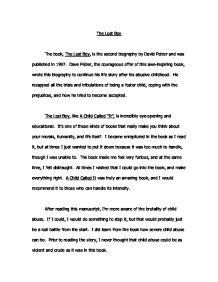 The Lost Boy The book, The Lost Boy, is the second biography by David Pelzer and was published in 1997. Dave Pelzer, the courageous offer of this awe-inspiring book, wrote this biography to continue his life story after his abusive childhood. He recapped all the trials and tribulations of being a foster child, coping with the prejudices, and how he tried to become accepted. The Lost Boy, like A Child Called "It", is incredibly eye-opening and educational. It's one of those kinds of books that really make you think about your morals, humanity, and life itself. I became enraptured in the book as I read it, but at times I just wanted to put it down because it was too much to handle, though I was unable to. ...read more.

I could probably say I relate to David because I was once an innocent child. David, however, had a horrible childhood, and I did not. I don't know what I would have done if I had been in David's position, that's a tough concept to consider. Honestly, I would have either committed suicide, or ran away, probably the latter. I would never have been able to take the abuse like David did, but then again, that's all he knew, so that's a different story. If I saw a child abuse case in my life, any extreme of child abuse, after reading this book, I would act immediately. There are plenty of agencies out there that handle child abuse, and I would turn the situation over to them, and let the professionals handle it. ...read more.

Since there are no physical abuse symptoms in this case, there is not much I can do; besides support my friend when the situation hits its bad points. The only real way to help other people by using this book would be to recommend that they read it. It's an amazing book, as long as a great learning experience. I think that everyone should be aware of this issue, because it's everywhere. The more people that read A Child Called It, the better the world will be. My favorite scene from the book is the opening scene. Before David tells about the abusive part of his life, he tells you a little about when he was saved. This really inspired me, because it shows that there really are decent human beings out there, for I had started to doubt it after reading the horrific scenes of the book. I'm glad someone saved David; I know I would have if I had been there. ...read more.