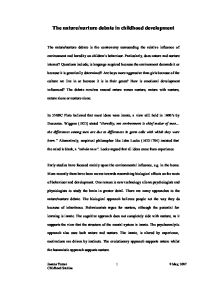 The nature/nurture debate in childhood development.

The nature/nurture debate in childhood development The nature/nurture debate is the controversy surrounding the relative influence of environment and heredity on children's behaviour. Particularly, does nature and nurture interact? Questions include; is language acquired because the environment demands it or because it is genetically determined? Are boys more aggressive than girls because of the culture we live in or because it is in their genes? How is emotional development influenced? The debate revolves around nature verses nurture, nature with nurture, nature alone or nurture alone. In 350BC Plato believed that most ideas were innate, a view still held in 1600's by Descartes. Wiggam (1923) stated "Heredity, not environment is chief maker of man... the differences among men are due to differences in germ cells with which they were born." Alternatively, empirical philosopher like John Locke (1632-1704) insisted that the mind is blank, a "tabula rasa". Locke argued that all ideas came from experience. Early studies have focused mainly upon the environmental influence, e.g. in the home. More recently there have been moves towards researching biological effects on the roots of behaviour and development. One reason is new technology allows psychologists and physiologists to study the brain in greater detail. There are many approaches to the nature/nurture debate. The biological approach believes people act the way they do because of inheritance. Behaviourists argue for nurture, although the potential for learning is innate. ...read more.

This usually occurs around the age of 3 years old. It is where the child has to show he/ she is happy even if they are not. This is most likely learnt through nurture. A child knows when it is appropriate to smile, fitting into what society redeems to be good and bad. Albert Bandura (1925) a social psychologist, carried out studies on children who imitate others behaviour. He believes that most of our behaviour is learnt. An example is the "Bobo doll". Nursery school children were asked to watch some short films, each had a different ending. The children would see an adult attacking the inflatable doll. He would sit on it, punch it, kick it and shout things at the doll. In one film the adult was rewarded for his behaviour, in the second one punished, in the third there was no punishment or reward. The children were then given a chance to play with the dolls and objects were available to them such as a mallet that was used in the films. Children who had seen the adult being rewarded each committed on average two and half more aggressive acts out on the doll than those who saw no punishment. Those who saw the adult being punished on average carried out one and a half time less aggressive acts Intelligence is a significant part of child's development. ...read more.

Needlman (1996) Children begin to develop gross motor skills such as running and fine motor skills such as writing at 18 months and 6 years respectively. These skills support the nature argument, as it is possible to say that the brain development plays a major role in this co-ordination. However it may also be the support of parents that encourage the child's practice in these areas. Illnesses in children such as asthma also question the nature/nurture debate. Asthma is a dry cough, tightness in the chest and wheezing. On one hand it can be inherited through genes, although according to Crain, Weiss, Bijur et al (1994) it could also be caused due to living in poverty or crowded conditions. In conclusion the nature/ nurture debate is one that will never be resolved as people are use different features for their arguments. On one-hand theorists, scientists and the public argue that nature and innateness is what helps child's development. Others may argue that it is nurture that plays the role such as imitation of speech of their parents, the home in which they live, whether they are living in poverty or wealth. The two approaches are linked it is both nature and nurture that influences the child's development. The balance varies depending on the situation of particular children, e.g. poverty. Although the child may have innate basic instincts and drives for things such as learning, language, aggression or morality. It is also the environment that plays a major role. There is interaction between nature and nurture. ...read more.

This is an excellent essay that demonstrates good research and understanding. It is evident that the writer knows what they are talking about.