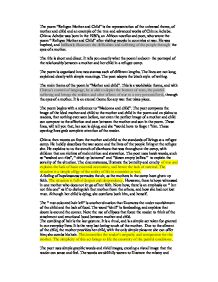 The poem &quot;Refugee Mother and Child&quot; is the representation of the universal theme, of mother and child and an example of the true and advanced works of Chinua Achebe.

The poem "Refugee Mother and Child" is the representation of the universal theme, of mother and child and an example of the true and advanced works of Chinua Achebe. Chinua Achebe was born in the 1930's, an African novelist and poet, who wrote the poem " Refugee Mother and Child" after visiting people in countries at war. He was inspired, and brilliantly illustrates the difficulties and suffering of the people through the eyes of a mother. The title is short and direct. It tells you exactly what the poem is about- the portrayal of the relationship between a mother and her child in a refugee camp. The poem is organised into two stanzas each of different lengths. The lines are not long, explained clearly with simple meanings. The poet adopts the blank style of writing. The main theme of the poem is "Mother and child". This is a worldwide theme, and with Chinua's control of language, he is able to depict the horrors of wars, the painful suffering and brings the realities and after-effects of war to a very personal level, through the eyes of a mother. ...read more.

to explain the severity of the situation. The circumstances, illustrate the brutality and cruelty of war and explains the lack of basic essential necessities, and hence the lack of survival. The situation is a simple effigy of the reality of life in countries at war. A feeling of hopelessness pervades the air, as the mothers in the camp have given up faith. The situation is full of despair and despondency. However, there is hope witnessed in one mother who does not let go of her faith. Note how, there is an emphasis on " but not this one" as if to distinguish that mother from the others, and how she had not lost trust. Although her child is dying, she comforts both him, and herself. The " rust coloured hair left" is another situation that illustrates the under nourishment of the child and the lack of food. The word "skull" is foreboding, and explains that doom is around the corner. Note the use of ellipses that force the reader to think of the attachment and emotional bond between mother and child. ...read more.

This demonstrates the attachment between the mother and child, and how the last gesture of combing her child's hair, was like saying goodbye to him. Chinua's control over the English language allows him to use plain and ordinary words but with powerful meanings to leave an impact on the reader. The tone is painful, depressing, and one of melancholy and grief. It shows us the pain of losing a loved one, and the sorrow of war. The poem has no rhyme scheme, and is more like a eulogy or epitaph. This is because; a rhyme scheme may hamper the effect of the poem and the powerful display of emotions. The poem teaches us the most pure and sacred relationship of a mother and child. The poem engenders a feeling of sympathy for the mother and it creates a vivid image of a mother holding on to her son, before he breathes his last. It brings to light the after-effects of war and illuminates the emotional bond between a mother and her child. The poem applies to mankind in general, and elucidates the reality and suffering of war. Chinua Achebe simply reinforces, the dread, horror and dismay of the war scene through the eyes of a mother ...read more.