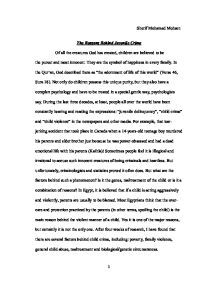 The Reasons Behind Juvenile Crime

Sherif Mohamed Mohsen The Reasons Behind Juvenile Crime Of all the creatures God has created, children are believed to be the purest and most innocent. They are the symbol of happiness in every family. In the Qur'an, God described them as "the adornment of life of this world" (Verse 46, Sura 18). Not only do children possess this unique purity, but they also have a complex psychology and have to be treated in a special gentle way, psychologists say. During the last three decades, at least, people all over the world have been constantly hearing and reading the expressions: "juvenile delinquency", "child crime" and "child violence" in the newspapers and other media. For example, that tear-jerking accident that took place in Canada when a 14-years-old teenage boy murdered his parents and elder brother just because he was power-obsessed and had a dead emotional life with his parents (Kaihla)! Sometimes people feel it is illogical and irrational to accuse such innocent creatures of being criminals and heartless. But unfortunately, criminologists and statistics proved it often does. But what are the factors behind such a phenomenon? Is it the genes, maltreatment of the child or is it a combination of reasons? In Egypt, it is believed that if a child is acting aggressively and violently, parents are usually to be blamed. Most Egyptians think that the over-care and protection practiced by the parents (in other terms, spoiling the child) is the main reason behind the violent manner of a child. ...read more.

Not only that, but she also confessed that before her mother got divorced she sometimes thought of killing him, because she felt pity towards her mother who usually fails to defend herself. The hypnotist came to the conclusion that this was, probably, the reason behind her violent manners especially with her younger brother. As mentioned, physical, mental and sexual abuse of a child are all included in the definition of "family violence", and are also believed to play a major role in converting a child from the purest state to his wildest form. Child abuse is not necessarily limited to the parents. Any adult is capable of abusing a child. According to Richard J. Gelles in his article "Child Abuse", there are three different types of child abuse: physical sexual and emotional abuse. Physical abuse includes child beating and other deliberate acts of violence that might injure or even kill a child. Sexual abuse "may begin with kissing or fondling and progress to more intrusive sexual acts, such as oral sex and vaginal or anal penetration." Lastly, emotional abuse destroys the child's self esteem through humiliating him and punishing him brutally such as isolating him in a dark closet. According to the article "Primary Prevention of Child Abuse", the consequences of child abuse "include an increased likelihood of future substance abuse, aggressive behaviors, high-risk health behaviors, criminal activity...and abuse of their own children" (Bethea). Moreover statistics show that 25% of the reported child abuse cases are physical, 11% are sexual and 3% are emotional (Bethea). ...read more.

This theory, relating genes to criminology, shall remain an unproved hypothesis unless scientists discover specific gene patterns which is linked to the tendency to act violently. To conclude, a child is the most innocent form of mankind. In addition to the special treatment it needs, any child's behavior reflects his society, including his parents at home, teachers and colleagues at school or even the types of movies he/she watches. In most cases, the parents are responsible for any delinquent manner a child may show. Sometimes they treat the child violently or even deal together physically, especially the fathers. Lack of communication between the child and his parents is another fatal mistake many parents commit without knowing that lack of communication is one of the initial steps towards violence, and theft crimes. From this, it can be deduced that counseling the parents is a very important procedure which should be taken by any country whose juvenile crime rate is high. But according to the saying that says, "prevention is better than the cure" it is much better and more effective to obligate high school students to study a small general psychology course, emphasizing the psychology of a child. On the other hand, schools' principles are completely responsible of punishing and suspending bullies who might cause themselves and other student's to being criminals. Developing countries should not stand still doing nothing about this issue. They too have a hard job of educating people to higher the standards of life, economically, socially and literally. 1 ...read more.