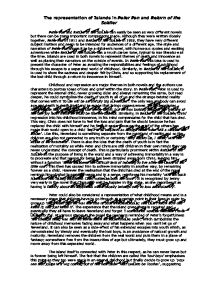 The representation of Islands in Peter Pan and Return of the Soldier Peter Pan and Return of the Soldier can easily be seen as very different novels but there can be many important comparisons made. Although they were written closely together, Peter Pan in 1911 and Return of the Soldier in 1918, they have very different subject matters and seem to be intended for audiences of a different age. The style and narration of Peter Pan shows it to be a children's novel, with humorous quotes and exciting adventures while Return of the Solider has a much darker tone, typical to war literature at the time. Islands are used in both novels to represent themes of death and innocence as well as placing their narrators on the outside of events. In Peter Pan this idea is used to present the character of Peter as avoiding the responsibilities and feelings of adulthood through his escape to a separated world of childhood. Similarly, in Return of the Soldier, it is used to show the sadness and despair felt by Chris, and so supporting his replacement of the lost child through a return to innocence in himself. ...read more.

However what he has returned to is a world that he no longer belongs to and this creates inconsistencies and doubts in his mind, much like Peter 'he had trusted that I at least would have been no party to this conspiracy to deny that he was young'. In this way Chris in his child-like state, as Peter is connected to Neverland, is connected to Monkey Island 'why, Monkey Island's real' and the only way to restore himself completely is to take himself back to that place. However, the memories that he carries from the island can not be relied on as they are the memories of childhood 'it was strange that both Chris and she spoke of it though it were not a place, but a magic state which largely explained the actions performed in it' and as he left the island and became an adult, the memories were also corrupted by the war 'lights in our house were worse than darkness, affection worse than hate elsewhere'. Throughout Return of the Soldier the reader is placed in the position of an outsider looking into the action, largely due to the novel being narrated by a character in the story, Jenny. ...read more.

This idea is introduced right from the first moment they meet, as a kiss is not shown for what it is 'I don't mean a kiss, I mean a thimble' and the theme of love as pretence grows on Peter's side as they become closer while it breaks down as Wendy grows up 'what are your exact feelings for me?' This is mirrored in the part of Return of the Soldier where Kitty dresses in her wedding dress as this shows the total lack of sexuality within their relationship, making her appear beautiful but in a completely desexualised way 'she looked cold as moonlight, as virginity, but precious; the falling candlelight struck her hair to bright, pure gold'. This removes the aspect of desire and highlights her grief experienced from being removed from her husband's life. Also in Return of the Soldier, sexuality becomes something that can only be experienced in the separated world of the island. Unlike in Peter Pan, the relationship between Chris and Margaret is something that is free and without the restraints of society, becoming something pure and without corruption away from the war 'seemed to him a guarantee that theirs was a changeless love which would persist if she were old or maimed or disfigured'. 2,050 ...read more.