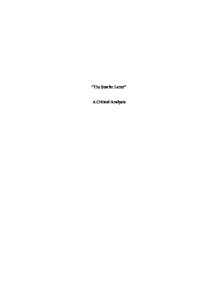 "The Scarlet Letter" A Critical Analysis Nathaniel Hawthorne was born in 1804 in Salem, Massachusetts, the direct descendant of John Hawthorne, and a judge at the infamous Salem witchcraft trials. The guilt that Hawthorne felt over the actions of his ancestor had an enormous impact on his writings. In his introduction of "The Scarlet Letter", Hawthorne accepts the guilt from his forefathers and offers to repent for their crimes (Waggoner, 5). This unusual way of viewing guilt and sin is one driving factor in Hawthorne's writing. The other, which is closely related to the first, is the relationship between men, and of man to humanity as a whole. Many of Hawthorne's works center around what is right or wrong, and the consequences of breaking the basic links between humans by committing acts of sin. Although Hawthorne has several great works to his credit, the one that is generally considered to be the best is "The Scarlet Letter". Imagine there is no freedom of choice. The human race is going straight to hell. Only God'' fickle grace can save us. Only be giving yourself totally to His devotion can you escape hell's gapping, flaming mouth. ...read more.

What about Pearl? She is marked from the get-go, presumed by the Puritans to be the child of the devil. Even Hester absorbs the social view that nothing good can issue from a woman who was in a state of sin when the child was "imbibing her soul." So naturally, Pearl turns into a child who "cannot be made amendable to the rules." She is wild and seems to be part animal, part demon, all of which is to say she is definitely not fully human. She does eventually grow up to lead an apparently prosperous life - but only by escaping from her home and living in England. Part way through "The Scarlet Letter", Hester and Pearl have one of those fundamental conversations about where Pearl "came from" that might have been a lesson in family values, had Hester not felt the pressing need to protect Pearl's father. Hester drills Pearl: "Tell me then, what thou art and who sent thee hither?" Pearl demurs, so Hester offers the correct answer: "Thy Heavenly Father sent thee." Pearl is having none of it: "He did not send me. I have no Heavenly Father." ...read more.

She tells him he has repented enough, and casts off her patch with the scarlet "A". "Thou must know Pearl, our little Pearl," she tells him. Dimmesdale worries that Pearl won't warm up to him or trust him. But pearl, summoned now to join Hester and Dimmesdale, goes into a "fit of passion" and refuses to come until Hester dons the scarlet "A" again. "He waits to welcome thee . . . He loves thee, my little Pearl, and loves thy mother too. Wilt thou not love him? Come! He longs to greet thee!" Pearl had been burned before. If he really loves her, she wants proof. She wants Dimmesdale to act like a father and a husband. "Doth he love us?" she asks, staring into her mother's eyes. "Will he go back with us, hand in hand, we three together, into the town?" Once again, the adults tell her a deeper truth that contradicts all their previous words: "Not now, dear child." Nathaniel Hawthorne's "The Scarlet Letter" is a wonderful piece of American Literature. The setting of the story related well to the history of Salem, Massachusetts and that time period in history. ...read more.